NASA's Juno spacecraft picked out a hexagon of storms hidden beneath the top layer of Jupiter's clouds. 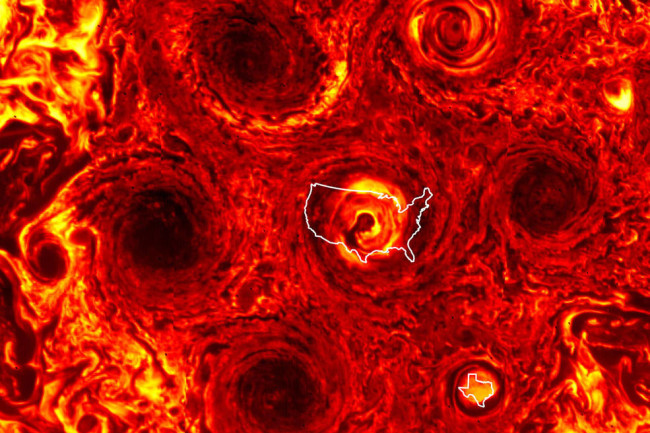 A sixth storm has been discovered churning beneath the clouds of Jupiter. (Credit: NASA/JPL-Caltech/SwRI/ASI/INAF/JIRAM)

Juno, a NASA spacecraft that has been orbiting Jupiter since 2016, has discovered a huge new cyclone at the gas giant’s south pole. It's the sixth in what's now a hexagonal array of cyclones surrounding one central storm at the pole.

Scientists announced the discovery Thursday at a meeting of the American Geophysical Union in San Francisco.

The Juno spacecraft was launched in 2011 and entered orbit around Jupiter in 2016. Its primary mission is to understand how Jupiter formed and evolved over time. It's the first mission that can peer below the top layer of Jupiter’s clouds.

Onboard Juno is a camera that can see the infrared light that Jupiter emits from within its atmosphere. This camera lets scientists track the motions of gases below the planet’s surface. And with this latest research, the camera has revealed complex movement in Jupiter’s clouds that wasn’t known before.

One of Juno’s first discoveries in 2016 was a series of enormous storms arranged in a pentagon around Jupiter’s south pole, with five cyclones surrounding a central one. Now, the mission has spotted a new storm that joined the fray, creating a hexagonal array of storms around the planet’s south pole. The central storm is roughly the size of the continental U.S., while the newest storm is about the size of Texas.

From Intruder to Family

The arrangement of multiple storms at the gas giant’s pole was a surprise to planetary scientists. Based on simulations, they expected that a new storm popping up might trigger an episode of cannibalism, in which multiple storms swallow one another to create one large vortex.

But models show these storms may not dissipate anytime soon.

When astronomers were simulating these structures and changed the sizes and strengths of "buffer zones" in the gases around the storms, the storms actually repelled each other enough to keep from merging. Their models showed how this new storm may have joined the circle of cyclones surrounding the central one without disrupting the arrangement.

Researchers don’t yet fully understand what causes the peculiar arrangement of storms on Jupiter. Future observations should let them create better-informed simulations and reveal the secrets of Jupiter’s polar storms.

There's Not Enough Data on How Women Deal With Endometriosis. These Scientists are Changing That