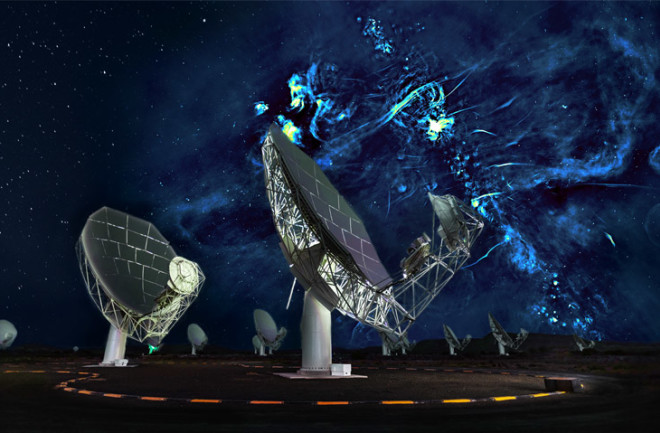 The MeerKAT telescope is superimposed on a radio image of the Milky Way’s center. Radio bubbles extend from between the two nearest antennas to the upper right corner, with filaments running parallel to the bubbles. (Credit: SARAO/MeerKAT)

The Milky Way is blowing bubbles. Two giant radio bubbles, extending out from the galaxy for over 1,400 light years, were just discovered in X-ray data. Astronomers think the bubbles started forming a few million years ago due to some type of cataclysmic event near the galaxy’s central supermassive black hole.

The bubbles’ location also closely matches the range of over 100 narrow, magnetized filaments of radio emissions that stretch for tens of light years in length. First discovered 35 years ago, these filaments’ origins have remained a mystery, but the bubbles’ discovery may now provide an answer.

“The filaments have been a mystery for a long time,” said Ian Heywood, astronomer at the University of Oxford and lead author on the new discovery. He says their results hint that the event that created the bubbles could have also produced high-energy charged particles that created the filaments.

The symmetry of the bubbles billowing above and below the galaxy suggests they were formed by an extremely energetic explosion near the supermassive black hole at the center of the Milky Way. The most likely explanation is a flare up in the black hole’s activity as it gobbled up extra nearby material and burped out other particles and radiation. The bubbles could also have been created by an extreme burst in star formation that sent a shock wave across the galactic center. Or possibly, it was a combination of both events.

The discovery, published on September 11 in the journal Nature, used the MeerKAT telescope, a radio telescope with 64 antennas, at the South African Radio Astronomy Observatory (SARAO) in South Africa. Astronomers there were taking some of the first science images with the new telescope, looking at the radio emissions of the central galactic region, when they made the surprising discovery.

“These enormous bubbles have until now been hidden by the glare of extremely bright radio emission from the center of the galaxy,” said Fernando Camilo of SARAO in Cape Town, and a co-author on the paper, in a press release.

The astronomers were specifically looking at a type of radio emission called synchrotron radiation. This type or radiation is created when relativistic electrons — those traveling at nearly the speed of light — encounter strong magnetic fields, which imparts a particular signature on the light. Astronomers often use this type of radiation to pinpoint highly energetic regions in space.

The new discovery isn’t the first giant bubble seen escaping from the Milky Way. In 2010, astronomers discovered two similar giant bubbles of gamma ray radiation blossoming above and below the galaxy, extending a combined length of 50,000 light-years. Now known as the Fermi bubbles, the origin of these balloons of radiation is still unexplained, but likely linked to the galaxy’s central supermassive black hole. The astronomers on this latest research think that the new radio bubbles they’ve discovered may have been caused by a smaller but similar event.

“These fascinating radio bubbles provide a new window into understanding recent activity at the galactic center,” Andrew Fox, astronomer at the Space Telescope Science Institute, in Baltimore, Maryland, who was not involved with the new research, said via email. “Other observations taken across the electromagnetic spectrum have revealed evidence for a burst of activity several million years ago, and these new observations provide another clue. Taken together, the results show that the Milky Way blows bubbles on different scales.”

By connecting the origin location of the bubbles to the central black hole region of the galaxy, astronomers are starting to learn more about the processes in this dynamic region. It may also help them learn about events unfolding in other galaxies. Evidence for giant gamma ray bubbles, like the Fermi bubbles, have also been seen outside the Milky Way in its nearest neighbor, the Andromeda galaxy.