Getting the God of Thunder’s Science Straight 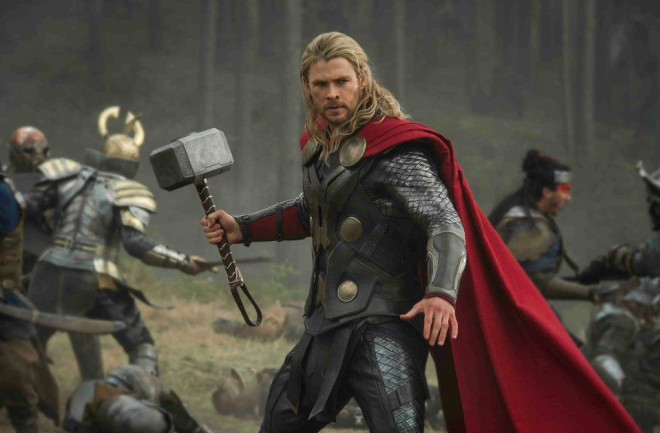 With Thor: The Dark World out today, it’s time to delve back into superhero fandom to find, surprisingly, just how scientifically grounded the powers of the blonde-haired god are. The God of Mass and Momentum Back in February, everyone’s favorite astrophysicist Neil deGrasse Tyson took to Twitter to opine on the physics of Thor and his hammer. Basing his calculations on the density of neutron stars, he figured that Thor’s hammer should weigh more than 300 billion elephants. Interesting to think about, but wrong. Looking to the canon encased in surely mint-condition comics, other Thor enthusiasts noted that Thor’s hammer, Mjolnir, is about 42 pounds. Not quite a legion of elephants compressed into a block, but you still wouldn’t want to get hit in the face with it. Just ask an ice giant. But if we should look to the original comics to settle the question of Mjolnir’s mass, both sides are technically correct—the hammer is simultaneously incredibly massive and light enough to hold. James Kakalios, author of The Physics of Superheroes, is kind of the go-to guy when it comes to science in comic books. Like the rest of us nerds, he had his own ideas about the mass of Thor’s hammer, now immortalized in the actual comics. Informed by Kakalios and delivered by Hulk’s alter ego Bruce Banner, Marvel comics’ Indestructible Hulk No. 8 tells us that Thor’s hammer can effectively change its mass by emitting graviton particles. By changing gravity around itself, the hammer can both be light enough for Thor to swing and too heavy for enemies to lift from the floor (thanks to identification nanotechonolgy, no less). This is also why in The Avengers Hulk cannot lift the hammer even though he can sprint through an aircraft carrier. Of course, if you don’t buy the graviton argument, the comic and Kakalios offer another—magic. Get over it.

(Nerd Aside: According to the comics, the Hulk is potentially infinitely strong, given that he gets mad enough. This means that if he tried to pick up Thor’s hammer, the hammer would have to quickly scale gravity around it up to match the Hulk’s increasing strength. At some point in this battle, if the Hulk got mad enough, the hammer would become so massive that it would sink through the Earth, become a black hole, and destroy everything.)

Though they are easy enough to make, it’s hard to accept magical arguments for Thor’s hammer because its mass is integral to understanding his other powers. Take Thor’s ability to fly. By swinging the hammer at great speed, Thor builds up a gargantuan amount of momentum in it. After Thor releases the hammer, he holds onto the leather thong at the end. Thor’s momentum is miniscule in comparison, and so the hammer continues to fly through the air with him attached to it (I explored Thor’s ability to fly, equations and all, here). It’s actually a rather tidy scientific explanation—Thor can fly via the momentum of a massive hammer, but can also carry it around without having to be the strongest being in the universe. By changing mass, the hammer allows Thor to fly. The God of Gravity How Thor flies is pretty straightforward (if you accept graviton-emitting, nanotechnology-embedded super weapons that can direct lightning), but the seemingly magical attraction between the god and the hammer is far less explored. There is a lot of Norse magic invoked to explain how the hammer can shred through steel and concrete and find its way to the god’s hand. With an arm outstretched, Thor calls to it, and it comes. How? By changing a fundamental constant of our universe (maybe). During The Avengers, Thor battles the Hulk and gets over-powered. Wiping blood from his nose, he straightens a muscled arm outwards. Nothing. A moment later, his hammer comes crashing through metal and plastic to find his hand. Explaining this feat with magnetism won’t work—if Thor is controlling a magnetic field like X-men’s Magneto, the metallic hammer would at least have to be within range and not out-of-sight. Maybe sticking with the way the hammer can change gravity around it will work. Though the idea has now been superseded by Einstein’s theories, Newton first proposed a mathematical description of the gravitational force between two objects over 300 years ago. He used it for the orbits of planets; we will use it for Thor and his hammer. The gravitational force that pulls two objects towards each other is described by this equation, and is dependent on the masses of two objects, how far they are apart, and a universal constant, G. This force is also reciprocal—each experiences the same force. However, how much that force moves the objects is another matter. For example, if you were to orbit Jupiter, its incredible size would produce a large gravitational force on you. You would “pull” with an equivalent force on Jupiter. While you would hurtle towards the interior of the gas giant, Jupiter wouldn’t move at all because of the force required to accelerate such a massive object. What all that physics jargon means for Thor and his hammer is that if the two were gravitationally linked somehow—like with the graviton-emitting nanotechnology that helps him fly—there could be a situation where the hammer is cosmically compelled to fly towards him, like you would be to Jupiter. But even if Thor’s hammer could make itself almost impossibly light, the gravitational force between them still wouldn’t be enough to make it fly his way. There has to be enough force to accelerate the hammer. The other option is to also change the universal gravitational constant, G. If Thor’s people have the technology to use tesseracts, maybe they could make hammers that could increase this constant by a trillion (the constant is really, really small). If they could, then with a flick of his hand, Thor could call to the hammer, which would be accelerated appreciably, while Thor stands still. Once in his hands, the hammer changes the constant back, becomes more massive, and smacks the heck out of some Dark Elves. No magic, but still magical. The Magic of Reality In 1962, British writer Arthur C. Clarke opined in his essay “Hazards of Prophecy: The Failure of Imagination,” that any sufficiently advanced technology would be indistinguishable from magic. This became the most widely cited of Clarke’s three “laws” formulated in that essay. Today, the law is used to talk about how we would perceive visiting aliens. If extraterrestrials had the technology to travel time and space to get to us, they would effectively be gods among us. I think using Clarke’s framework is the best way to talk about Thor. Thor comes to Earth and is, for all intents and purposes, a deity. He is super-strong, can fly, has incredible technology that we don’t understand, and comes from a place we can hardly imagine. But leaving it at the god explanation is uninspiring, which is why nerdy discussions of the science and the physics make these stories so fun for fans to live in. Thor is magical, yes, but it is the magic of reality. His hammer was crafted “in the heart of a dying star,” but so were you! Most of the atoms that make you up are in fact the innards of a ball of gas in space that got so heavy that it exploded. Stars died so that you could live, as physicist Lawrence Krauss would say. And how Thor flies is implausible at the least, but you can approximate riding the wave that is conserved momentum by simply water-skiing. Picking apart a story for its scientific underpinnings doesn’t diminish it, it enhances it, makes us dream of the possibilities it proposes. I think appreciating the magic of reality, going from “can’t happen” to “could happen”, is the fundamental appeal of science fiction. In other words, even after we set the science straight, even after imagining gravity-altering hammers and grossly inflated universal constants, science fiction stories can still be enjoyable and engrossing, and in a real way, magical. --

Tip of the tweet to Ed Yong, who posited the idea of Thor changing the universal constant to attract his hammer to him.