Getting Bubble Blowing Down to a Science 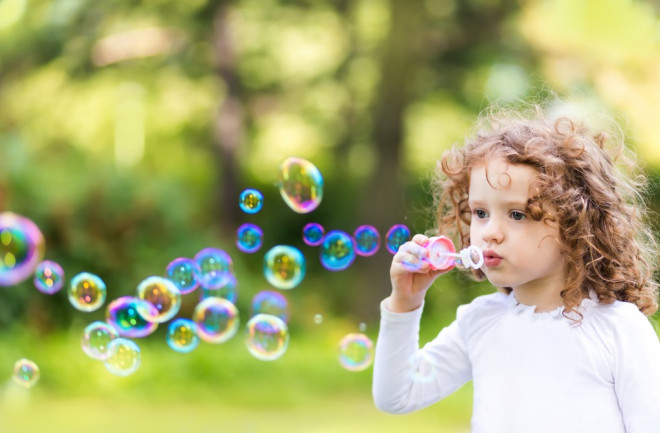 Credit: Yuliya Evstratenko/Shutterstock As every child knows, blowing the perfect bubble is an art form. Now, scientists have optimized a favorite childhood pastime. Researchers at the University of Rennes in France conducted an experiment aimed at blowing the perfect bubble from a solution of ordinary dish soap and water. By combining a specialized apparatus for holding the soap film with nozzles of various sizes, the researchers brought scientific rigor to bear on a process that, for all its popularity, has seen very little research. They tested various combinations of nozzle size, air speed, distance, and even gas type to find the bubble-making sweet spot.

Bubbles made with dish soap are composed of a layer of water sandwiched between two layers of soap. The surface tension on the water holds the bubble's surface together, and the polar attraction between the soap and the water molecules maintains the bubble's shape. When you blow on a bubble wand, the force pushes the thin layer of water and soap outward until it equals the diameter of the air jet, at which point it breaks off and floats away. A bubble pops when gravity pulls enough of the soap and water from the top to the bottom, thinning the bubble's skin until it can no longer hold itself together.  Blowing too hard on a bubble wand will cause the layer of solution to disappear. But if you don't blow enough, the surface will just ripple, as the force of the jet cannot overcome the surface tension holding the layer of solution together. It takes just the right amount of force for an iridescent sphere to emerge and float away. Surprisingly, the researchers found that the wider the jet, the easier it is to form bubbles. They think that this is because large bubbles have a much gentler curve than small ones, meaning that less force is required to counteract the pull of surface tension. [embed]https://www.youtube.com/watch?v=JYm9hZytyXM[/embed]

In all, researchers worked with nozzle sizes ranging in size from less than a millimeter in diameter to 20 centimeters. And in addition to air, they also used helium and sodium hexafluoride, which are lighter and heavier than air, respectively. The researchers found that in most cases it took air speeds of 10 meters per second to form a bubble. Different combinations of jets and distances increased that speed to 100 meters per second in the most extreme cases. In the video above, the researchers appear to have found the optimum combination of nozzle size and distance. They recently published their soapy findings in Physical Review Letters. The researchers say their work holds importance for more than just playing in the backyard. Bubble physics is useful for everything from torpedoes to computing. Enhancing our understanding of the mechanics behind behind bubbles, quite simply, illuminates an area of physics that was previously poorly understood.