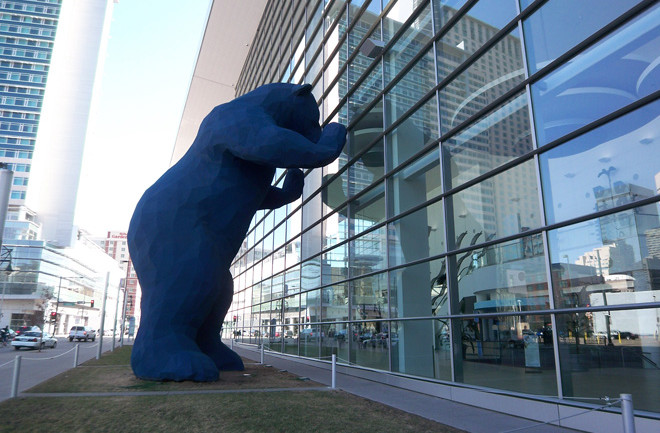 The Blue Bear at the Colorado Convention Center in Denver, location of this year's GSA Annual Meeting. The bear always seems so desperate to get in. Image: Jeff Turner / Flickr. So, I'm off to Denver tomorrow for the Geological Society of America Annual Meeting. This meeting, along with the American Geophysical Union Fall Meeting, are the two largest gatherings of geologists in North America and are always full of exciting (and sometimes controversial) research. I'll be trying to post updates while I'm at the meeting, but time is always at a premium, so be sure to check out my Twitter feed (@eruptionsblog) to see my tweets about any talks or posters that are volcanologically fascinating. As a bit of a preview, here are a few of the sessions where you might find me during the course of the GSA Annual Meeting: Sunday

- In my research wheelhouse, I'm especially exciting about hearing research by Icelandic zircon and the growth of composite plutons. Magma transport, emplacement and accommodation: Morphology, mechanisms and models - So, how do we get all this magma to fit into the crust? Looking forward to a talk by Allen Glazner on reconciling all the seemingly contradictory data from intruding magma bodies. Also: rhyolites of the Black Hills? Who knew.

Processes and timescales of magma evolution in the crust: Insights from the past fifty years and approaches for the next fifty years -

Without fail, every year at GSA or AGU, two sessions that I really want to attend are scheduled to run concurrently. This time, it is this sessions and the Magma Transport session (above). I might end up parked here for much of the day watching talks about ignimbrites in the Lesser Antilles and high precision U-Pb dating applications for understanding magmatism. Why those two talks? Well, the presenters were both members of the Keck Undergraudate Research Project on Vinalhaven Island I took part in during my college career. Doesn't that beat all? MondayVolcanology, mineralogy, geochemistry and petrogenesis of circum-Pacific magmatism: A tribute session to Gerhard Wörner - If you're a petrology, especially one who has worked on subduction zones (or in the Andes), you know Gerhard Worner. This sessions brings together research surrounding a lot of the key questions he has tackled during his career and is topped off by a keynote talk from Gerhard on Andean magmatism. Even beyond talks, there are plenty of posters to check out as well related to some of these sessions. Then a pile of alumni reunions in the evening, including the first time at Denison has taken part in the Alumni Reception at the meeting. Tuesday In a bit of a one-off, my former research student will be giving a talk on her Masters' work at UC Davis, looking at zircon hosted inside garnets to date metamorphic events. Honestly, is there anything zircon can't do? Then, I'll be spending much of the afternoon at my poster, which is part of the Magma transport session. If you are at GSA, why not stop by and say "hi!" My posters looks at some of the rocks I've been examining in the Mineral King region of the Sierra Nevada. Another one of my former research students looked at the pressures and temperatures of the pluton in which the metamorphosed rocks of Mineral King are found and discovered that they crystallized 9-11 km below the Earth's surface. This means that the volcanic rocks that make up Mineral King had to be sucked down between the invading Sierra Nevada batholith granite at a rate of ~1-2 km/Ma between ~108-98 Ma. The downward movement of crust might be one important way we can squeeze all this magma into the crust. Also, if you're discussing geosciences on social media (blogging, tweeting), come on by our gathering at the Yardhouse on Tuesday at 7 PM. Wednesday

- Another session about the central focus of a lot of my research -- and full of great talks, including one suggesting a new eruption mechanism, one linking ignimbrites with plutons and one by my former postdoctoral advisor on the evolution of silicic magma (oddly enough, my former Ph.D. advisor is in the same session. Well, I guess that isn't too odd.) Microanalysis of trace element and isotopes in igneous petrology: Applications to genesis, storage, evolution, transport and eruption of magma - Everything in petrology these days is about analyzing smaller and smaller parts of the magmatic system. Always exciting, but fraught with peril of losing the forest for the trees. This session has some great talks looking at zircon from Mount St. Helens, the chronology of eruptions in Yellowstone after the last big one and a primer on how to deal with all these new types of data. This is just the tip of the iceberg for the GSA Annual Meeting -- you can find all the myriad flavors of geosciences there. Who knows, usually my best laid plans for talks goes astray and I wander into talks I never imagined I'd see, but that is the fun of meetings like this. Time to hear what is new, strategize with colleagues, mingle with friends and see where we are as a discipline.