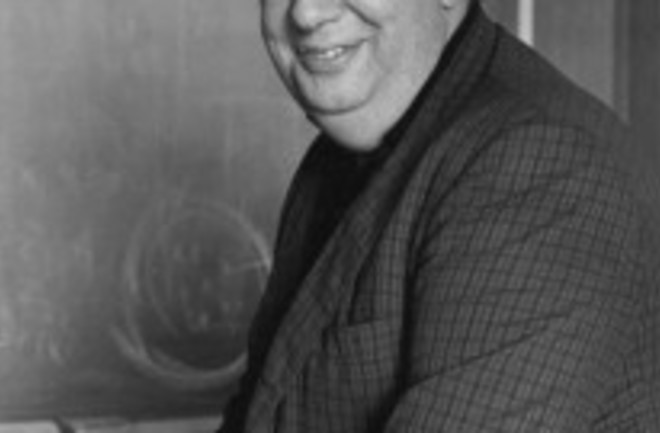 I happen to be visiting UCSD this week, and woke to the news that Geoffrey Burbidge passed away yesterday afternoon. He was a giant in the field of astronomy and cosmology, and (despite himself) was one of the main contributors to the establishment of the standard Big Bang model of cosmology. He was perhaps best known for his work in stellar nucleosynthesis (encapsulated in the B2FH paper: Burbidge, Burbidge, Fowler, and Hoyle 1957, Rev. Mod. Phys. 29, 547), which in some sense established that we are all made of "star stuff". There are few research papers that are widely known simply by their author's initials (especially over 50 years later); the paper even has its own wikipedia page. (Off hand, the only other one I can think of is EPR.) However, for the past years Burbidge was primarily associated with advocating a steady-state model for the Universe. For many decades this model was incredibly important, as it provided a foil with which to challenge the big bang theory. It pushed us to get as much data as possible, and helped usher in the era of precision cosmology. In some sense, it is because of the steady-state model that we are as confident as we are in the big bang model. [Famously, the very name "big bang" was coined derisively by Hoyle, one of the originators of the steady state model, and the "H" in B2FH.] Burbidge was a proponent of his alternative cosmology, long after the vast majority of people in the field abandoned it. The data became overwhelming (in particular, the incredibly perfect black body spectrum from COBE, and then the completely incontrovertible "acoustic" peaks from WMAP, among other things). Burbidge was adamant that we should always question, and carefully distinguish between data and models. He did not like the "bandwagon" aspect of science, and remained leery of the broad consensus behind the big bang. There's an article in our very own Discover Magazine which nicely sums up Burbidge's personality and science. He did vital and important work in the field, and should be remembered for this.