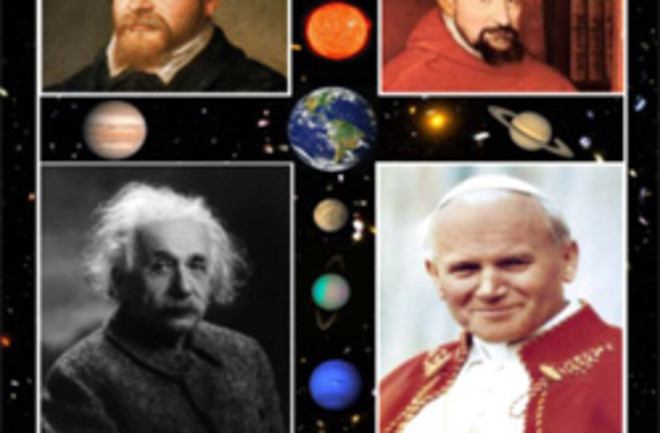 In my long, long experience as both a scientist and an active skeptic, I have seen people believe in a lot of seriously, um, oddstuff. In many cases, it doesn’t matter how overwhelmingly the evidence is against them, or how even simple logic will unravel their tangled theories. They cling to these beliefs like a drowning man clings to a life preserver.

And even with all this, I have to scratch my head over Geocentrists.

These are people who believe that the Earth is fixed in space, unmoving and unmovable, and the Universe literally revolves around it. Without exception, in my experience, these followers of Geocentrism believe in it due to a literal interpretation of the Bible. Finding passages in the Bible to support this belief isn’t hard; Genesis is loaded with them.

However, like young-Earth creationism, the problem here is in that "literal" part*. If you take the Bible to be true word for word, then you have to deny a vast amount of reality, and almost everything we’ve learned about the Universe since the Bible was written.

That has not stopped some people, nor even slowed them down. A group of Geocentrists is holding a conference this November in Indiana. Called "Galileo Was Wrong: The Church Was Right", it features a veritable who’s who in geocentrism — not that there’s a lot of them. The meeting flyer is presented above; click it to see the conference details. The conference website is full of all sorts of claims saying Geocentrism is real, science is wrong (except where it supports them; cherry-picking is something else they have in common with creationists), the Bible is the only truth, and so on.

Well, as you might expect, I have something to say about that.

I have two things to say that might surprise you: first, geocentrism is a valid frame of reference, and second, heliocentrism is not any more or less correct.

Surprise! Of course, the details are important.

Look, I’m human: I say "The Sun rose in the east today", and not "the rotation of the Earth relative to the rest of the Universe carried me around to a geometric vantage point where the horizon as seen from my location dropped below the Sun’s apparent position in space." To us, sitting here on the surface of a planet, geocentrism is a perfectly valid frame of reference. Heck, astronomers use it all the time to point our telescopes. We map the sky using a projected latitude and longitude, and we talk about things rising and setting. That’s not only natural, but a very easy way to do those sorts of things. In that case, thinking geocentrically makes sense.

However, as soon as you want to send a space probe to another planet, geocentrism becomes cumbersome. In that case, it’s far easier to use the Sun as the center of the Universe and measure the rotating and revolving Earth as just another planet. The math works out better, and in fact it makes more common sense.

However, this frame of reference, called heliocentrism, still is not the best frame for everything. Astronomers who study other galaxies use a galactic coordinate system based on our Milky Way galaxy, and the Sun is just another star inside it. Call it galactocentrism, if you want, and it’s just as useful as geo- or heliocentrism in its limited way. And none of those systems work if I want to know turn-by-turn directions while driving; in that case I use a carcentric system (specifically a Volvocentric one).

You use coordinate systems depending on what you need.

So really, there is no one true center to anything. I suppose you could say the Universe is polycentric, or more realistically acentric. You picks your frame of reference and you takes your chances.

So geocentrism is valid, but so is every other frame. This is the very basis of relativity! One of the guiding principles used by Einstein in formulating it is that there is no One True Frame. If there were, the Universe would behave very, very differently.

Geocentrists, at this point, fall into two cases: those who use relativity to bolster their claim, and those who deny it.

The other flavor of Geocentrist, those who deny relativity wholesale, are wrong as well. Relativity is one of the most well-tested and thoroughly solid ideas in all of science for all time. It is literally tested millions of times a day in particle accelerators. We see it in every cosmological observation, every star that explodes in the sky, every time a nuclear power plant generates even an iota of energy. Heck, without relativity your GPS wouldn’t work.

Relativity is so solid, in fact, that anyone who denies it outright at this point can be charitably called a kook†.

So — you guessed it — either way, Geocentrism is wrong.

Those are really the strongest arguments against Geocentrism. You either have to misuse relativity, or deny it entirely, and either way you lose, GOOD DAY SIR!

There are other arguments used, and they seem like good ones but in fact they don’t work out in real life. For example, the most obvious one is that distant stars are light years away. If they circle us once per day, they must move faster than light, which is impossible! This is true even for Neptune; at its distance it would have to move at just faster than light to make one circle every 24 hours.

I thought about this, and wound up asking my friend the cosmologist and fellow Hive Overmind blogger Sean Carroll. He confirmed my thinking: relativity says the math has to work out if you change a frame of reference, so if you do the detailed relativistic equations to look at the motion of distant objects, it still works. Things actually can move faster than light relative to the coordinate system, it’s just that things cannot move past each other with a relative speed greater than light. In the weird geocentric frame where the Universe revolves around the Earth, that is self-consistent.

In other words, the Neptune-moving-too-quickly argument sounds good, but in reality it doesn’t work, and we shouldn’t use it.

Sometimes, you can make things easier by simplifying. However, you can’t oversimplify, because in the end it makes things harder.

Some geocentrists assert the Earth doesn’t move because it’s just plain obvious. The stars appear go around us, so maybe they really just do. And that makes things simple. But it doesn’t. I mean, it makes calculating the times of sunrise and sunset easier, but it makes it a lot harder to send a space probe to Saturn, since according to them it’s moving at 1/3 the speed of light around us. Far easier to use a heliocentric coordinate system there.

And Geocentrists have to assume that all local phenomena are caused by cosmic motion. For example, the Coriolis effect, which makes hurricanes spin different ways in the northern and southern hemispheres, is relatively easy to explain if you assume a spheroidal rotating Earth. For a Geocentrist, you have to assume that the Universe itself is revolving around us, and affecting the weather here. Again, the math works out, but it’s standing a pyramid on its tip: you have it precisely backwards. And with one poke the whole thing falls over.

We also know earthquakes can affect the rotation of the Earth. That makes sense since they shift the mass around on the surface, and that changes how the Earth spins. To a Geocentrist, though, that earthquake affects the entire Universe.

I could give example after example of this, but you get the drift.

In the end, the actual evidence is totally against the Geocentrists. The only way — the only way — they can assert their idea being factual is to rely on the Bible itself, and ignore everything else. That’s a losing game, because every time a new discovery comes along, they have to ignore it. Of course, ignoring facts is clearly something they are very well-versed in.

If they want to have a faith-based conference where they show everyone that the Bible says the Universe is Geocentric, then by all means they can do that. But when they say that science backs them up — or even that scientists are suppressing The Truth (which one conference speaker is apparently claiming, given his talk title of "Geocentrism: They Know It But They’re Hiding It") — well, the scales have not yet fallen from their eyes.

I understand that to them, these beliefs are deep-seated and as true to them as, say, gravity is to me. But the Universe doesn’t care how strongly you believe in something. If it ain’t right, it ain’t right.

Geocentrism ain’t right. No matter how much spin you put on it.