Gas Flows Like a ‘Waterfall’ Onto a Young Planet, Hinting at Where Atmospheres Come From 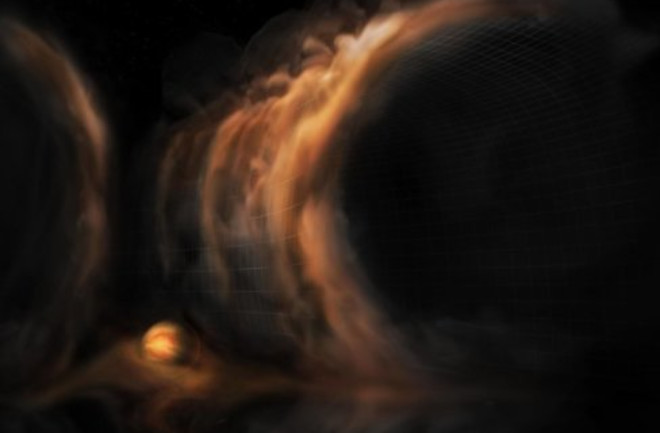 Stars and their planetary systems are born from clouds of gas and dust that collapse into swirling disks. Astronomers can’t directly see planets forming in these disks because they’re hidden in all the debris. But in the past few years, new kinds of telescopes have started to reveal gaps in disks around young stars where planets might be forming.

Now, astronomers have seen gas flowing in toward the gaps in one of those disks, as they reported Wednesday in Nature. The finding will help astronomers understand how planets collect the gases that make up their atmospheres. It’s also a sign that those gases “waterfall” down from higher up in the disk — not just the so-called mid-plane where the planets are forming.

And, thanks to a computer model, the team of scientists behind the study showed that planets in those locations can explain the gas motions the researchers saw. With this new piece of evidence, it looks likely that this disk contains at least three planets. As an added bonus, the astronomers discovered that gas motions in these protoplanetary disks are more complicated than expected.

“There’s a lot more going on than we previously thought,” said astronomer Richard Teague, who led the study while at the University of Michigan. “We thought it was just rotating in a rather smooth manner.”

When astronomers used the Atacama Large Millimeter/submillimeter Array radio telescope in Chile to snap photos of young stars, they saw clear disks of dust around them. Teague and his team wanted to know what gases in these disks were doing. They looked at ALMA observations of one young star’s disk, called HD 163296, in a specific wavelength of light emitted by carbon monoxide gas. Though the gas in the disk is mostly hydrogen, carbon monoxide emits most brightly in the wavelengths the researchers could access and allows for the most detailed observations.

The researchers discovered that gas wasn’t just circling around the star within the disk. They saw gas flowing down into the disk in three concentric rings at different distances from the center, like water tumbling down both sides of a trench. The three “trenches” they found were 87, 140 and 237 times as far from the young star in the center as Earth is from the sun. The two inner trenches were in the same places as gaps seen in the dust of this disk. The outermost one was farther out, where there wasn’t any dust.

The researchers created a computer model of a disk of gas and inserted three planets at the distances where they had seen this new gas flow. Over time, the model evolved to show the same flowing where the simulated planets were — just as the researchers had seen in HD 163296. That means it’s fairly likely that planets caused the gas flowing behavior the researchers saw in the real disk.

In the future, Teague said, he plans to study HD 163296 in other wavelengths that will reveal how gas is moving deeper within the disk. He’s excited to learn more about the detailed motions of gases in a newly forming planetary system.