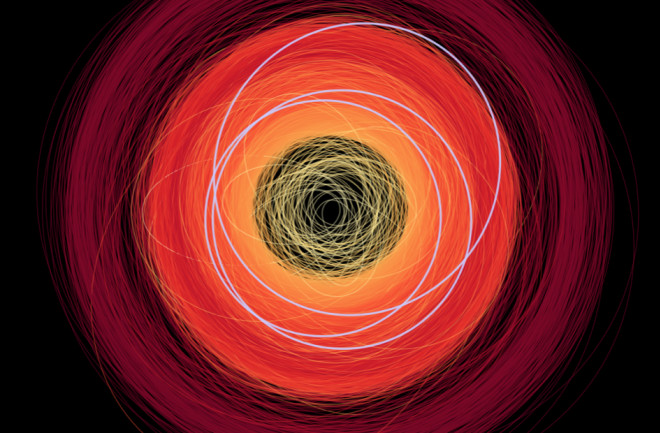 The Gaia spacecraft keeps track of all the objects it spies, whether faraway stars or nearby asteroids. (Credit: ESA/Gaia/DPAC) The European Space Agency's Gaia spacecraft is on a mission to map a billion stars. But as it stares out into space, it also spies a lot of closer objects. The newly released image above shows the orbits of 14,000 asteroids that it mapped during its first two years of observing. Most of those objects were known about from previous surveys. But three objects are new, those ones are picked out in gray in Gaia’s image. The few dozen yellow tracks show asteroids that are considered near-Earth objects, while orange represents the main asteroid belt between Mars and Jupiter, and dark red highlights the Trojan asteroids that orbit closer to Jupiter. All three of the new objects have orbits tilted out of the plane of the solar system and most of the rest of the asteroid population, which is how they were missed by past surveys. But Gaia looks at the whole sky, and so is less limited than many past surveys. Even though Gaia’s main focus is on stars outside our solar system, scientists have nonetheless established an alert system for the local objects the spacecraft does pick up. When Gaia spots an asteroid that can’t immediately be matched to a known object, ground-based observers receive an alert to make targeted follow-up observations. Often, they find themselves adding information about an object previously discovered but with a poorly understood orbit. And a few times, they have found themselves confirming a brand-new object. So far, all of the new asteroids Gaia has spotted belong to the main asteroid belt. But scientists are keen to keep tracking new objects, in case any of them should stray closer to Earth and pose a threat.