Fuel, the Movie, Encourages You to Change Your Energy and Your World

Director of the upcoming documentary talks about beating global warming. 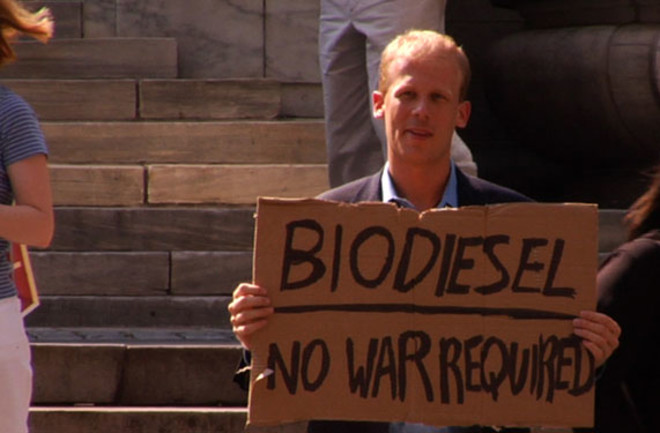 The movie title changed from Fields of Fuel to just Fuel. Why?

There's been a real shift in the movie. As we filmed it, we started investigating biodiesel. Our question going into the film was, "Why didn't the U.S. switch to biodiesel after 9/11?" By the time we showed the film at Sundance, we hadn't actually answered that question. We were still waiting on interviews and footage and our animations were not complete.

In the past six months, we realized it wasn't just biodiesel—the question became, "Why didn't we switch to green energy?" The powerful collusion between the government, petroleum industry, and the auto industry has created a stalemate for all forms of fuel. By "fuel," I am talking about energy—solar, plug-ins, energy efficiency, non-food biofuels, and a whole section of future tech like deep geothermal. Things on the cutting edge of being available. We distinguished seven categories, turning a movie about biodiesel into one about the core issue of fuel.

Overall, we are committed to the evolution of the energy industry and therefore we must evolve ourselves.

Do you still think biofuels are an essential part of the solution?Non-food biofuel is one part of the seven solutions that we come up with. Soybeans and corn are not future energy crops for America or anyone else. The original cut [which was screened at Sundance and elsewhere] shows myself as an advocate of all biofuels. To go back in and admit failure was a very hard thing. We [biofuel advocates] failed because we promoted an unsustainable fuel source and it didn't work. But certain aspects of it did pan out. Fuel from algae, fuel from fast-growing trees, and fuel from waste products are some of what remains of the successful biofuel movement.

We realized that food is getting more expensive around the world because of fuel—but not just biofuels. The chain of grown food is predicated on oil. Any biofuel that we create cannot be made from a food source because food is even more precious than it was.

What are the other six factors you look into?Solar, wind, plug-in hybrids, public transportation, energy efficiency and conservation, and future tech. There are pros and cons to each of these solutions. The way we typically talk about them is as isolated solutions.

To use these solutions, we need to use them all. You don't address the fact we have the least public transportation without addressing what kind of fuel you use. You don't convert to plug-ins without understanding we have a coal grid. I call this “an ecology of solutions.”

A good chunk of your movie talks about Willie Nelson's move to become a biodiesel-from-food advocate at the truck stop Carl's Corner. Does what Willie stands for now go against your non-food-biofuel advocacy? Why leave that part in?From the times that I've been with Willie Nelson, I think he understands that biodiesel is just one of the solutions. Willie Nelson has an allegiance to middle-of-the-road Americans. He thinks green energy shouldn't be a thing that only people that shop at Whole Foods have access to.

This is important. We want to avoid creating an ecological elite. One of the things I learned in my interview with Vinod Khosla is that a car has to meet a price that the average middle-income person in China and India can afford. And it has to pass the Mississippi test—meaning someone in Mississippi has to want to buy that. It can't just work in California, which is where most of these green cars go. Willie's section will stay in the movie because green energy has to be for everyday people.

You seem to take the concept of peak oil as a given. Are you a peak-oiler?Absolutely. I realized this as I was sitting at a bar drinking Guinness with famous oil geologist Colin Campbell [as seen in the movie]. What I realized in that conversation was that it's not the point where we run out of oil, it's the point where we have extracted half of the world's oil. Geologists can look at maps of every major oil field on the planet and point out where we are in each. The geologists who have access to those maps and aren't funded by major oil companies say we are passing peak oil.

This is why we're scrambling to produce oil shale—like a drug addict reaching for the vein in their toe. I think peak oil is a good concept to alert people to the fact that this is a social addiction. Only a society addicted to oil would fail to understand the ramifications of peak oil. We consumed more oil this year than last even though the world supply has dropped.

What piece of legislature needs to pass to alleviate our fuel crisis?If I were to pass one piece of legislation, it would be campaign-finance reform. Energy bills and cap-and-trades are like putting band-aids on a cancer. Every powerful person in D.C. is sponsored by corporations, and energy and oil companies are then financed by them. The underlying problem is the sponsorship of politicians by corporations. I wouldn't bother passing green legislation without campaign finance reform—it's a waste of time. Deal with the democracy and appropriate the climate-change legislation will flow. I think we have some hope that things will change under the Obama administration. But not without continued public scrutiny. We must hold every elected official accountable for performance—for citizens, not for corporations.

Where do individuals play a part?Climate change. As 4.5 percent of population the US creates 50 percent of automotive greenhouse gases through driving our cars. Yet we blame India and China as we export auto tech to those nations. One of the themes of the film is accountability and power. Only through taking responsibility can we change the future of energy. China is sitting on a bed of coal, and we've offered them coal technology.

It boils down to the fact that the market demands green solutions, and they're not showing up. People are demanding solutions that aren't being offered because something [corporations] is blocking them. Three-hundred mpg bio-algae cars with gas stations should be here. It's not too expensive and the technology exists. That’s really what the Fuel film is about. How to bridge the gap from our corporate/government stalemate to the green-energy future that awaits us all.