From Eternity to Book Club: Chapters Four and Five

Welcome to this week's installment of the From Eternity to Herebook club. This week we're tackling two chapters at once: Chapter Four, "Time is Personal," and Chapter Five, "Time is Flexible." That's just because these chapters are relatively short; next time we'll return to one chapter per week. Excerpt:

Starting from a single event in Newtonian spacetime, we were able to define a surface of constant time that spread uniquely throughout the universe, splitting the set of all events into the past and the future (plus “simultaneous” events precisely on the surface). In relativity we can’t do that. Instead, the light cone associated with an event divides spacetime into the past of that event (events inside the past light cone), the future of that event (inside the future light cone), the light cone itself, and a bunch of points outside the light cone that are neither in the past nor the future. It’s that last bit that really gets people. In our reflexively Newtonian way of thinking about the world, we insist that some far away event either happened in the past, the future, or at the same time as some event on our own world line. In relativity, for spacelike separated events (outside one another’s light cones), the answer is “none of the above.” We could choose to draw some surfaces that sliced through spacetime, and label them “surfaces of constant time,” if we really wanted to. That would be taking advantage of the definition of time as a coordinate on spacetime, as discussed in Chapter One. But the result reflects our personal choice, not a real feature of the universe. In relativity, the concept of “simultaneous faraway events” does not make sense.

These two chapters take on a task that is part of the responsibility of any good book on modern cosmology or gravity: explaining Einstein's theory of relativity. Both special relativity and general relativity, hence two chapters. In retrospect they are pretty short, so an argument could be made that I should have just combined them into a single chapter. The special challenge of these chapters is precisely that many readers -- but not all -- will already have read numerous other popular-level expositions of relativity. But you have to do it. Fortunately, my favorite way of talking about relativity is a little bit different from the standard one, and lines up well with the overarching goal of understanding the meaning of ``time.'' In particular, I try to make the point that the secret to relativity is to think locally -- to compare things happening right next to each other in spacetime, not events that are widely separated. You're allowed to compare separated events, of course, but the answers are necessarily dependent on arbitrary choices of coordinates, and that leads to endless confusion. So you won't read a lot about "length contraction" or "time dilation," but you will read a lot about the actual amount of time measured along a trajectory. Unfortunately, a search for vivid examples of the maxim "freely-falling paths through spacetime experience the longest amount of proper time" led me directly to the most embarrassing mistake in the book. (At least, "most embarrassing mistake so far uncovered.") Sordid details below the fold! The mistake is the claim that a clock that sits stationary on a tower will experience less proper time than a clock that orbits the Earth at the same height above ground. That's wrong: the orbiting clock will measure less time. This appears in the paragraph at the bottom of page 85 and top of 86, and is elevated from "unfortunate" to "a real doozy" by being illustrated in graphic detail by the figure on page 86. Not really any way I can claim it was just a typo. 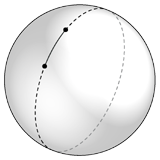 The subtle issue underlying the mistake is illustrated in this figure, which shows two paths connecting two points on a sphere. Both paths are great circles. The shortest distance between two points on a sphere is a great circle; but it certainly doesn't follow that any path following a great circle gives us the shortest distance between two points. If you go more than half the way around the sphere, you end up with a pretty long path! The same kind of thing happens in spacetime. The trajectory of longest proper time between two events will always be a freely-falling trajectory (a geodesic). But not every freely-falling path gives us the longest time, and that's exactly the case in this example. Given two events at the same position above the Earth, the actual path of longest time is a radial freely-falling orbit. If you want your clock to experience the longest time it can, you throw it straight up in the air to where the gravitational field is weaker (and clocks run more quickly with respect to time measured at infinity) and let it fall back down. A circular orbit actually loses time by staying at the same altitude but zipping around the Earth. I relied on my affection for the general underlying principle, and didn't bother to sit down and work out the actual numbers in this case, so I never found the mistake. Pretty sure my membership in the general relativists' guild is going to be permanently revoked for this one. If you're still not convinced of the wrongness of my example, here's an equation, the line element along a circular trajectory in the equatorial plane in the Schwarzschild metric: $latex dtau^2 = left(1-frac{2GM}{r}right) dt^2 - r^2 dphi^2,.$ On the left we have a small interval (squared) of the proper time τ, what a clock would measure along some path. The first term on the right is the contribution from our motion with respect to t, the time measured at infinity; for any given amount of t, we experience less proper time τ as our height r decreases and the coefficient (1-2GM/r) becomes smaller. The second term on the right is the contribution from our angular motion φ. Taking the square root of the whole thing and integrating along a path gives you the proper time. We don't have to go through the entire calculation to convince ourselves that staying stationary on the tower has a longer proper time than the circular orbit does. Both trajectories get the same contribution from the first term on the right side, while the second term is zero for the clock on the tower (it's not moving, so dφ=0), but it's negative for the orbit. So the orbit is definitely less time. To be corrected in the next printing. The deep point, of course, remains true: the time measured by clocks in general relativity depends on their path through spacetime, and the way to maximize that time is to take a freely-falling path. Just not that one.