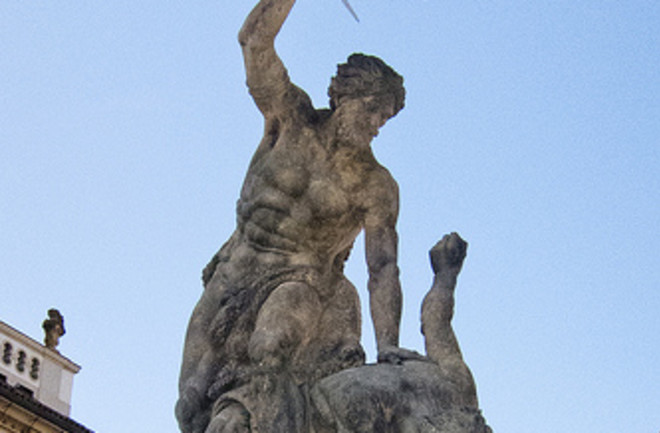 How can a woman without a vagina become pregnant? By getting stabbed in the abdomen after performing oral sex, setting free the sperm from her stomach, of course. This incredible case report was published more than 20 years ago (and similar storieshave been circulating since well before then), but we think it’s worth revisiting. Read to the end to hear how cattle were involved!

Oral conception. Impregnation via the proximal gastrointestinal tract in a patient with an aplastic distal vagina. Case report.

“Case report: The patient was a 15-year-old girl employed in a local bar. She was admitted to hospital after a knife fight involving her, a former lover and a new boyfriend. Who stabbed whom was not quite clear but all three participants in the small war were admitted with knife injuries.

The girl had some minor lacerations of the left hand and a single stab-wound in the upper abdomen. Under general anaesthesia, laparotomy was performed through an upper midline abdominal incision to reveal two holes in the stomach. These two wounds had resulted from the single stab-wound through the abdominal wall. The two defects were repaired in two layers. The stomach was noted empty at the time of surgery and no gastric contents were seen in the abdomen. Nevertheless, the abdominal cavity was lavaged with normal saline before closure. The condition of the patient improved rapidly following routine postoperative care and she was discharged home after 10 days.

Precisely 278 days later the patient was admitted again to hospital with acute, intermittent abdominal pain. Abdominal examination revealed a term pregnancy with a cephalic fetal presentation. The uterus was contracting regularly and the fetal heart was heard. Inspection of the vulva showed no vagina, only a shallow skin dimple was present below the external urethral meatus and between the labia minora. An emergency lower segment caesarean section was performed under spinal anaesthesia and a live male infant weighing 2800 g was born…

…While closing the abdominal wall, curiosity could not be contained any longer and the patient was interviewed with the help of a sympathetic nursing sister. The whole story did not become completely clear during that day but, with some subsequent inquiries, the whole saga emerged.

The patient was well aware of the fact that she had no vagina and she had started oral experiments after disappointing attempts at conventional intercourse. Just before she was stabbed in the abdomen she had practised fellatio with her new boyfriend and was caught in the act by her former lover. The fight with knives ensued. She had never had a period and there was no trace of lochia after the caesarean section. She had been worried about the increase in her abdominal size but could not believe she was pregnant although it had crossed her mind more often as her girth increased and as people around her suggested that she was pregnant. She did recall several episodes of lower abdominal pain during the previous year. The young mother, her family, and the likely father adapted themselves rapidly to the new situation and some cattle changed hands to prove that there were no hard feelings.

Comments A plausible explanation for this pregnancy is that spermatozoa gained access to the reproductive organs via the injured gastrointestinal tract. It is known that spermatozoa do not survive long in an environment with a low pH (Jeffcoate1975), but it is also known that saliva has a high pH and that a starved person does not produce acid under normal circumstances (Bernards & Bouman 1976). It is likely that the patient became pregnant with her first or nearly first ovulation otherwise one would expect that inspissated blood in the uterus and salpinges would have made fertilization difficult. The fact that the son resembled the father excludes an even more miraculous conception.”

Oral conception. Impregnation via the proximal gastrointestinal tract in a patient with an aplastic distal vagina. Case report.
1 free article left
Want More? Get unlimited access for as low as $1.99/month
Subscribe