Friday Eye Candy Mystery: What Are You Looking At? 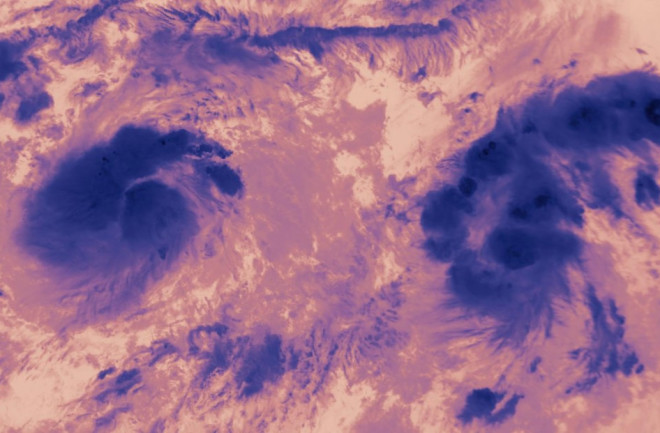 Looks may be deceiving. Or not... | SEE BELOW FOR THE ANSWER — AND THE WINNER | When I first started ImaGeo, I did a few posts that included a spectacular but mysterious natural feature, and I invited readers to guess what they were looking at. (Here's an example, and another one too.) When I spotted the features in the image above, I thought it would be fun to try a visual mystery like that again. What do you think you're looking at? To keep you from going too far off track, I'll stipulate that these features are not microscopic or biological. I'll also say that your eye would not perceive the colors this way. Lastly, these features may, or may not, be found on Earth. Leave your guesses in the comments section. The first person to guess correctly gets the glory of having their name in lights at ImaGeo. (Or at least a prominent mention.) May the best person win! | UPDATE 8/4/13: In their comments below, two people came closest to guessing the correct answer. See the comment from Fred, as well as from Bill Koury. The two features were indeed made of clouds. But there was no snow-capped region below them, as Fred guessed. And they were definitely storms, but they were not headed for landfall, as Bill Koury surmised. Of the two guesses, Bill definitely came closest. So I hereby declare him the winner! The image was captured by NASA's Terra satellite on July 30th. The false color shows brightness temperature, which can give meteorologists a handle on the structure of a storm and how high the cloud tops are rising into the atmosphere. The storm on the right was at that time a tropical storm named Gil. It became a hurricane the next day. It has since weakened into a tropical depression. The storm on the left was a low pressure system dubbed 91E. And off the frame to the right was another system named 90E. Here's a broad view of the scene, in natural color, so you can see where the storms were located:

A broad view of the Pacific Ocean captured by NASA's Terra satellite on July 30th shows Tropical Storm Gil sandwiched by two low pressure systems: System 91E to the left and System 90E to the right. (Image: NASA) I was struck by all this activity in the Pacific, and how close together these developing storms were. Evidently, so was NASA, which posted this image and an accompany story on Aug. 2. Thanks to everyone who participated. And please check back. I hope to do more contests.