Freezing Light in Its Tracks 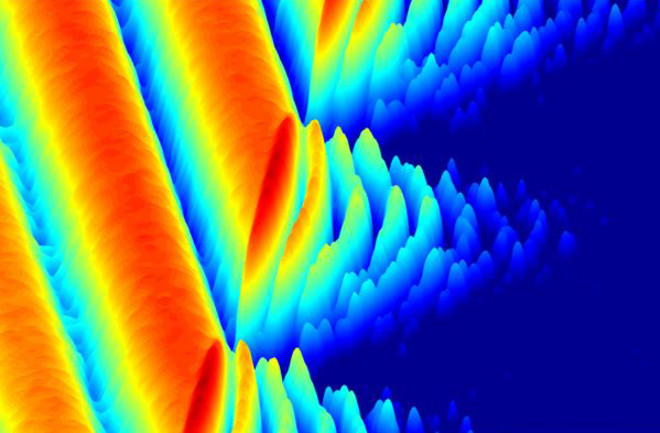 Researchers “froze” light by allowing photons to interact with each other and lose energy, like water molecules losing heat and freezing. Courtesy James Raftery and Andrew Houck/Princeton University

Light is thought to be the fastest stuff around, zipping so speedily through the universe that, even if it were tangible, you probably couldn’t pin it down. But in September, physicists reported the seemingly impossible: They froze light into a crystal-like state.

Light particles, or photons, normally interact only with matter, not each other. But Princeton physicist Andrew Houck and colleagues built a device that effectively lets one photon trade energy with another, putting them in a crystal-like state. The device, about ¼ inch across, sounds simple: two tiny wires bridged at one end by a capacitor, with the other ends plugged into photon generators. The team first shot photons into the wires while blocking their exit with two-way mirrors, and the photons behaved normally, bouncing freely back and forth between the wires.

But when Houck’s team added a tiny piece of supercooled aluminum near the ends not connected by the capacitor, they observed some odd effects. Because of the quirks of quantum physics (the unintuitive rules governing physical action, including that of particles, on the smallest of scales), the aluminum acted as a messenger between photons sent in the wires, imparting subtle changes on the photons with each bounce past it.

Eventually, the photons’ energy levels changed so much that it took more energy to jump between wires than to stay put. When that happened, the photons froze in place on one of the wires, like water molecules losing heat until crystallizing into ice.

This frozen state — intangible and invisible to human eyes — is a brand-new behavior for light. And Houck is planning a bigger device with 200 wires. Such a system may help scientists understand matter’s behavior when it gains or loses mass or energy. In other words, freezing photons could help shed light on the material world.