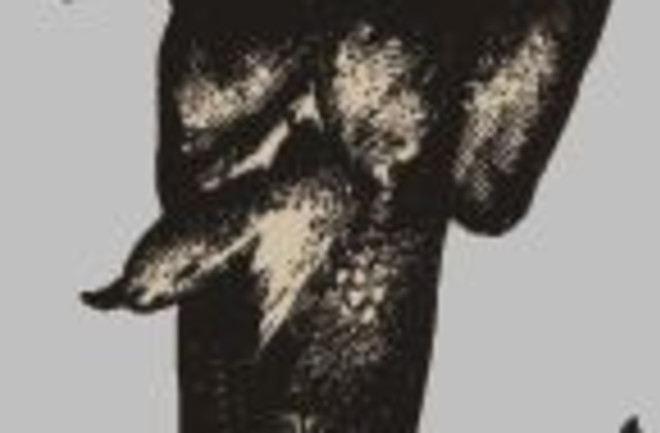 P.T. Barnum's Feejee mermaid—perhaps Animal Planet will feature it in their next "documetary"? Image from Wikipedia In 1842, the infamous showman P.T. Barnum unveiled a truly bizarre creature. In his autobiography, Barnum described it as "an ugly, dried-up, black-looking, and diminutive specimen... its arms thrown up, giving it the appearance of having died in great agony." The Feejee mermaid, as the mummified remains were called, possessed the torso of a monkey with the tail of a fish. Naturalists from around the world came to examine the specimen, enticed by letters explaining how a Dr. J. Griffin had hooked the strange creature while fishing in the South Pacific. At first Griffin was reluctant to share his find, but somehow, Barnum convinced him to reveal the mermaid to the public. Huge crowds swarmed the Concert Hall on Broadway just to get a glimpse. Things were not, however, as they appeared: The letters were written by Barnum himself. "Dr. J. Griffin" was only a character portrayed by Barnum's close friend, Levi Lyman. The so-called mermaid was purchased from Japanese sailors in 1822 and leased to Barnum by Moses Kimball. Barnum even asked for a professional opinion, and was assured by a naturalist that the mermaid was a fake. The tale of the mermaid's capture, Griffin, and his reluctance to unveil the animal was a publicity stunt. The Feejee mermaid, in all its grotesque glory, was P.T. Barnum's first major hoax. His knack for trickery, manipulation and showmanship proved highly profitable, and over the years, his circus became known as "The Greatest Show On Earth". In his autobiography, Barnum explained how he manipulated so many into believing in the Feejee mermaid. "How to modify general incredulity in the existence of mermaids, so far as to awaken curiosity to see and examine the specimen, was now the all-important question," Barnum wrote. "I saw no better method than to "start the ball a-rolling" at some distance from the centre of attraction." So he wrote letters, which appeared in New York papers, from Alabama, South Carolina, and Washington DC. "I may as well confess that those three communications from the South were written by myself, and forwarded to friends of mine, with instructions respectively to mail them, each on the day of its date. This fact and the corresponding post-marks did much to prevent suspicion of a hoax, and the New-York editors thus unconsciously contributed to my arrangements for bringing the mermaid into public notice." You might expect such deception and fraud from P.T. Barnum, one of the most notorious showmen of all time. But it seems the executives at Discovery Channel are cut from the same cloth.

I spoke to 500 students last year all over the country about #sharks . EVERY GROUP asked if #megalodon was still alive. Thanks @sharkweek

There's little doubt that this kind of publicity stunt undermines Discovery's credibility and is harmful to scientific progress and outreach. Last year, I warned Discovery

that their burgeoning reputation for being loose with facts was going to drive scientists away—scientists that they need to create the high-quality, educational programming they purport is their mission

. So I asked scientists whether they would work with Discovery. Some made it clear that they have no interest. "BBC - yes, Discovery - No," said Eric Heupel, a graduate student at the University of Connecticut. "unless I and any other scientists on show had approval power on the edited version (so final airing version) of the show." Unfortunately, such control over content is rarely given to scientists that appear on Discovery. They're asked for their time and expertise, but rarely get to read scripts, let alone write or correct them. Just look at last year's Shark Week, for example, which featured the work of shark scientist Neil Hammerschlag and his colleagues

in their "Great White Serial Killer" program, but completely distorted the research

(and didn't consult them on it). "Maybe 5 years ago I would," tweeted

Erik Klemetti, a volcanologist at Denison University. "Right now, it would be hard to be convinced that it wouldn’t be total pseudoscience nonsense."

Most, however, were hesitant. "It's tempting to say no on the basis of their recent and future programing," said Mike Lowe, a post-doc at Wood's Hole Oceanographic Institution. "But given the right opportunity and some serious soul searching, I would have to consider it." "I'd be worried about how it would appear to my colleagues," said Rebecca Helm, a graduate student at Brown University. "For me there is very little incentive in collaborating with organizations that are likely to misrepresent me and my research." "I think this is completely tragic, because organizations like Discovery also have a huge reach, and I want to share science with a large audience. It makes what they're doing even more hurtful and damaging," Helm added. Many were hopeful that the ship could be righted. "I think it's extremely important to keep trying," said Victoria Vásquez, Deputy Director at Ocean Research Foundation. "Nothing reaches that sort of audience for sharks, the ocean or any other wildlife. Consequently, I think it's important to be vocal and consistent with what we want out of Discovery and take every opportunity to change it." "If it were on a cool, real science project, then probably yes," said Greg Gbur, associate professor at UNC Charlotte. "My policy with a lot of problematic publications/channels is to vocally support the good and vocally blast the bad." Jim Gelsleichter, Assistant Professor at University of North Florida, echoed the sentiment. "You can't stop trying," he said,"the best that you can do is learn to speak to the media in a manner that reduces the chances that the unintended message will get out and select wisely."

@NerdyChristie I would, if I had a say in the content.... Would be nice to help steer it back in right direction. Not a lost cause (yet). — Lauren Bradshaw (@SharkyBradshaw) July 17, 2014

I would like to believe there's cause for such hope. Alas, the path Discovery as set themselves upon leaves me with little to cling to. It seems unlikely that they will ever go back to being the trustworthy media company I used to watch religiously. Instead, they seem hellbent on distorting science and fabricating content to capitalize on fear. Their sensationalized programming, shoddy fact-checking, outright fictions and unethical PR have transformed them. Like P.T. Barnum and the showmen of old, they happily sacrifice the truth to draw a bigger crowd and do whatever it takes for money and fame. Discovery no longer seems to care about the 'highest quality content'—so long as they can become The Greatest Show On Earth.