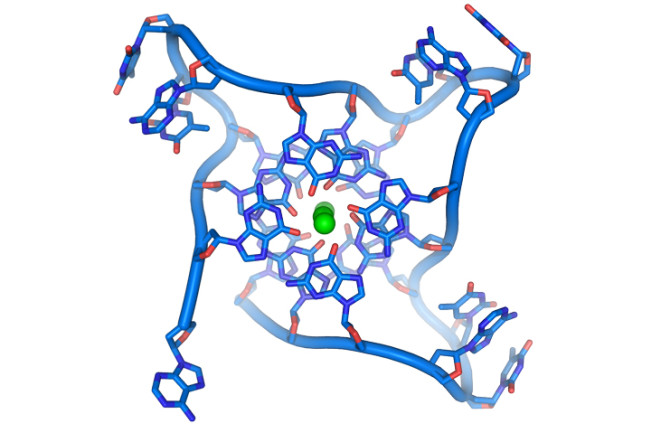 This top view of a G-quadruplex shows its structure in the DNA of a human telomere, where they frequently form. Thomas Splettstoesser/Wikimedia Commons

In describing the two-stranded structure of DNA, Cambridge University biologists James Watson and Francis Crick gave us the image of a twisting ladder they called a double helix. The rungs were connected by pairs of chemical bases called nucleotides: Adenine (A) paired with thymine (T), and cytosine (C) with guanine (G).

Now, 60 years later, researchers from the same institution have found a quadruplehelix — previously described only in microorganisms — in human cells. In place of rungs, the twisting, four-sided tower has platforms with a guanine nucleotide on each of four corners, hence the name G-quadruplex.

Chemist Shankar Balasubramanian and colleagues found the structures by engineering a special, fluorescent antibody that binds specifically to the four-stranded form. Initial results, published in January, trace the structures to cellular regions associated with explosive growth: telomeres, the protective caps of chromosomes implicated in aging and longevity, and cancer-causing genes.

G-quadruplexes may be linked to cancer, speculates molecular biologist David Tannahill, a member of the Cambridge team. If his suspicion bears out, then deploying these antibodies, which halt the replication of the quads, could present a means of treating malignant tumors.

The G-quadruplex is like a three-dimensional tower with multiple floors. Each floor, called a tetrad, has a guanine (G) base on all four corners. These G’s are held together with hydrogen bonds. A single strand of DNA can fold onto itself to form a G-quadruplex, or guanines from multiple strands can bond to form the four-stranded structure.

The antibody used in the study, called BG4, binds with quadruple helices and glows red. The glowing structures are visible here in the nucleus of a human bone cancer cell (left) and on the telomeres at the ends of chromosomes in cervical cancer cells (right). Jean-Paul Rodriguez and Giulia Biffi/Cancer Research UK Cambridge Institute