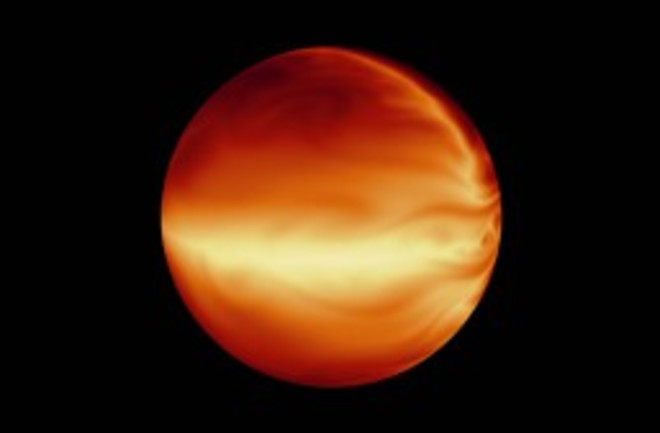 The hot gaseous exoplanet, also referred to as a "hot Jupiter," HD 80606b. After finding a hot Jupiter around a surprisingly young star, scientists have now found three other massive planets in the system. (Credit: NASA/JPL-CalTech)

Researchers have discovered a strange, young “toddler” star with four massive planets in orbit around it. This is the first time that so many massive planets have been found in such a young stellar system. The star at the center of this system, CI Tau, is only two million years old and surrounded by a protoplanetary disk made up of dust and ice. In this disk, the system’s planets, asteroids, moons, and other objects form. Scientists already knew about this system because they’d found a hot Jupiter — a gas giant exoplanet that orbits close to their star — around CT. It was the first hot Jupiter to be discovered around such a young star.

That prompted astronomers at the University of Cambridge to use the Atacama Large Millimeter/submillimeter Array (ALMA) to see if that planet had any siblings, according to study author Cathie Clarke from Cambridge University’s Institute of Astronomy. Clark says her team found “big structures in the disk that we interpret as planets.” Essentially, the team found three gaps (in addition to the hot Jupiter) in CI Tau’s disk that are most likely caused by three gas giant planets. That brings the total to four hot Jupiters around the star.

That makes it is unique among known solar systems this young.

As new technology emerges, the team expects to be able to detect the planets themselves, instead of just holes in the disk that they interpret as planets, Clarke said. The researchers also want to explore how such the weird solar system formed. That’s difficult with current theories.

“Planet formation models tend to focus on being able to make the types of planets that have been observed already, so new discoveries don’t necessarily fit the models,” Clarke said in a statement.

This work is published in the Astrophysical Journal Letters.