Four Exoplanets Sighted, One Close Enough to Dream of "Sending Spacecraft There" 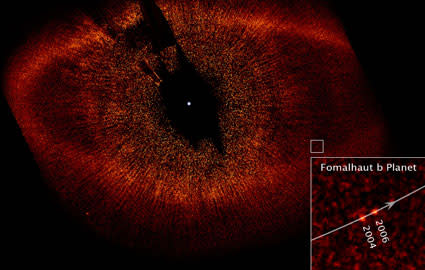 In news that has thrown astronomers and space enthusiasts into a tizzy of excitement, two separate research teams announced today that they have taken the first pictures of exoplanets, planets orbiting stars beyond the edge of our solar system. It's

an achievement that has long been considered vital in the search for planets like our own [Physics World].

More than 300 so-called extrasolar planets have been found circling distant stars, making their discovery the hottest and fastest growing field in astronomy. But the observations have been made mostly indirectly, by dips in starlight as planets cross in front of their home star or by wobbles they induce going by it. Astronomers being astronomers, they want to actually see these worlds, but a few recent claims of direct observations have been clouded by debates about whether the bodies were really planets or failed stars [The New York Times].

But these newly discovered celestial objects are the right size for planets, and were observed moving around their parent stars. Bothdiscoveries were published in the online version of Science [subscription required], and both research teams had to overcome the difficulty of detecting the dim glow of the planets against the massive light of their stars. The team that glimpsed the solo planet around the star Fomalhaut (pictured) used a device on the Hubble Space Telescope known as a coronagraph, which blocks out the central star to make the planet's glow more distinct. The planet, now known as Fomalhaut b, lies on the inner edge of a giant disk of debris, and orbits its star at a great distance, completing one revolution every 872 years. Lead researcher Paul Kalas noted

that Fomalhaut was the closest exoplanet yet discovered, “close enough to contemplate sending spacecraft there” [The New York Times].

Meanwhile, researchers used telescopes in Hawaii to find the planetary trio around star HR 8799, and say that all three planets in the star system appear to be gas giants.

If there are Earth-sized planets present, they are too small to see with current technology [Wired News].

The direct observation of exoplanets has been a cherished goal largely because that allows for spectroscopic observations, which could produce