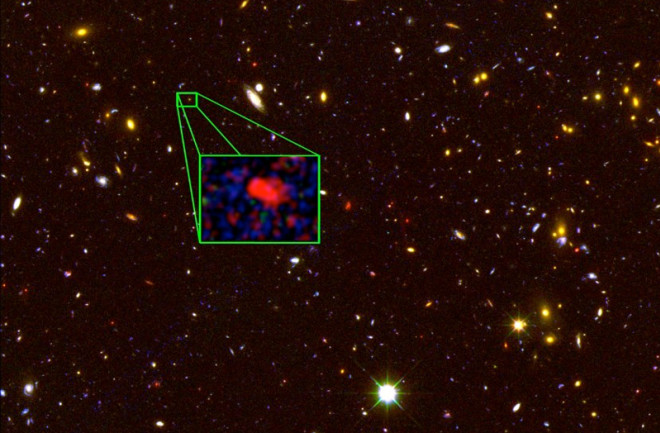 This Hubble Photo, full of galaxies, includes a zoomed-in view of the most distant known galaxy, z8_GND_5296.Credit: V. Tilvi (Texas A&M), S. Finkelstein (UT Austin), the CANDELS team, and HST/NASA There’s a reason “astronomical” also means a hugely large amount. Astronomers have found the most distant galaxy yet, one that dates back to just 700 million years after the Big Bang. That means its light traveled for more than 13 billion years, stretching along with an expanding universe, before finally arriving within the researchers’ instruments. Not only is that simply mind-blowingly cool, but the galaxy far, far away is also providing hints about what the early universe was like.

The star city in question, which those in the know simply call z8_GND_5296, first turned up in a Hubble Space Telescope survey called CANDELS (Cosmic Assembly Near-Infrared Deep Extragalactic Legacy Survey). The project — the telescope’s largest ever — discovered about 100,000 galaxies total, but ol' z8_GND_5296 and 42 others stood out as potential long-distance record-breakers. The astronomers took to the mountains to study these potential outliers: the Keck Observatory on Hawaii’s Mauna Kea volcano. Looking at the 43 galaxies in depth, only one had the kind of data they were looking for, a special kind of feature in its light spectrum called the Lyman alpha transition that indicated that it was exceptionally distant. The results appear in today’s

To be sure, there are other known galaxies that astronomers suspect might be even farther, but they haven’t been spectroscopically confirmed. Astronomers know where z8_GND_5296 is based on the way its light has been warped by the universe’s expansion, a phenomenon known as red shift because stretched light appears redder. Technically speaking, this galaxy has a redshift of z=7.51, which corresponds to a time 700 million years after the Big Bang — just 5 percent of the universe’s current 13.8 billion year age. Scientists estimate the galaxy now lies 30 billion light-years away from Earth.

Finds like this are important because they reveal what things were like in the young universe. In particular, z8_GND_5296 turns out to be unexpectedly rich in metals (which, to astronomers, means anything besides hydrogen and helium), as well as quite the star-forger, with a rate of about 330 solar masses per year (more than 100 times what our Milky Way forms). As the authors write:

Such a galaxy is unexpected in a survey of our size, suggesting that the early Universe may harbor a larger number of intense sites of star formation than expected.

Like most distance records, z8_GND_5296’s will probably not stand; better telescopes and imaging technology have always meant farther and older discoveries. But the insights it’s providing on conditions in the early universe and on galactic evolution will definitely stand the test of time.