The crater sits beneath a plain of hardened lava formed after the meteorite's impact. 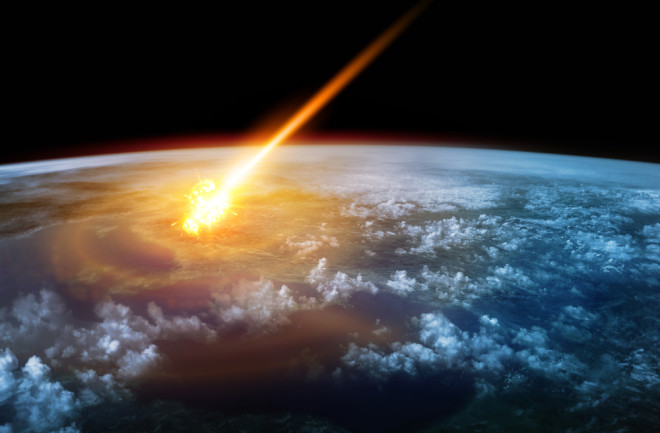 A flash of light would have come first, followed by a shockwave and massive earthquake. Only later would the hailstorm of black, glassy debris begun to fall, a rocky rain that would touch 10 percent of the planet's surface.

That's the scene that followed a massive asteroid impact 790,000 years ago. The remains it scattered, called tektites, have been found from Asia to Antarctica. For decades, scientists have searched for the elusive resting place of the impactor that coated the Earth with debris. Now, they may have finally found it.

A new report published in the Proceedings of the National Academy of Sciences says that the meteorite likely struck in southern Laos, carving an 8-by-10.5-mile crater now covered by a lava flow.

The find helps reconstruct some of the chaos that ensued after impact, says study co-author Kerry Sieh, a geologist at Nanyang Technological University in Singapore. It could also illustrate some of what we could expect if a similarly large asteroid were to hit Earth again.

A tektike, a piece of rock formed during an asteroid impact. (Credit: Holly Mazour/Shutterstock)

Most massive meteorites struck Earth so long ago that their craters have almost completely eroded, Sieh says. But this impact was unusual in that it was huge and recent enough that the site where it hit should be identifiable. But with rocks from the impact spread across the world, zeroing in on the location proved difficult.

The site eluded geochemists for decades, but Sieh decided to take a new approach and look at satellite imagery from parts of the world where the meteorite might have hit. In the Bolaven Plateau in southern Laos, he found an expanse of flat, shallow rock formed from hardened lava, just thick enough to obscure a crater of this size.

In-person excavations found the lava dated to around the same time as the impact, while surrounding sediments were older. Additional gravity measurements also hinted at a crater below. Altogether, it's enough for Sieh to be confident he's finally located ancient ground zero.

Anatomy of an Apocalypse

With the help of Sieh and his team’s find, researchers now have a slightly clearer sense of what must have happened after the asteroid hit. Roughly 1.25 miles wide, the rock would have opened a hole larger than San Francisco in a span of seconds.

The rock's speed and force would have been enough to send pillow-sized boulders careening through the air at almost 1,500 feet per second. Sitting on the perimeter of the suspected impact site, these rocks are a telltale sign of a meteorite impact. “It would not have been a healthy thing to be on the receiving end of that,” Sieh says.

For now, Sieh wants to focus on some of the ashy material surrounding the meteor debris. The impact would have incinerated all plant and animal life within 300 miles of the impact site, and Sieh is curious how that kind of settling dust would impact all of us today. The odds of such an impact are extremely low, but still fascinate Sieh. "I've never worked on meteorites before, but I got sucked into this with my curiosity," he says.

As for drilling down through the rock to confirm that this is, in fact, the site? "I'm 98 percent convinced we found it, but I’d be supportive of anyone who wanted to," he says.