Forget Al-Qaeda; Apparently It's the Aliens We Need to Worry About 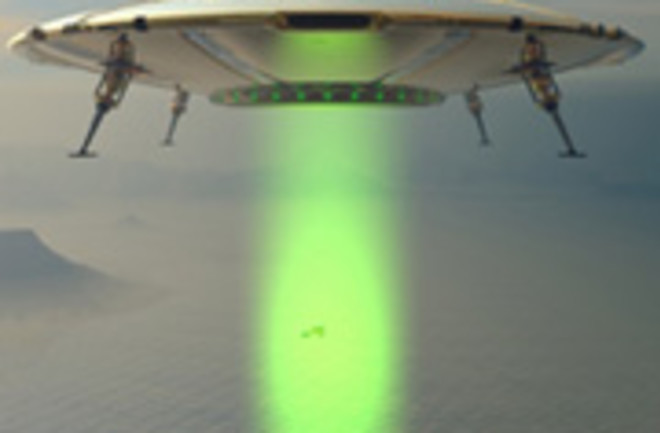 Is the U.S. military's overdependence on radar and indifference to UFOs a weakness that could be exploited by terrorists? That's what the New York Times is claiming in an op-ed by Nick Pope, author of Open Skies, Closed Minds and the former head of UFO investigations for the British Ministry of Defense. Pope argues that NASA and the Air Force are ignoring potential national security threats by not investigating "UFO phenomena" such as a cigar-shaped craft that was reportedly sighted near the Channel Islands in 2007. While he doesn't explicitly say that these unexplained aircraft are of the invaders-from-another-planet variety, Pope claims that our skepticism towards anything "below the radar" makes us vulnerable to attack from human-made flying objects with which we're unfamiliar (like oh, say, the secret invisible bombers that Al-Qaeda could be building in the Tora Bora caves?) That the Times is suddenly handing the microphone to an avowed UFO believer seems a bit odd, particularly when you examine Pope's history. Here's a review from Booklist of Open Skies, which was a best-seller in the U.K.:

If Pope is correct, Earth is currently in the middle of an interplanetary war. He claims that while he was stationed at the "UFO Desk" of Britain's Ministry of Defense, he studied UFO sightings as well as crop circles and cattle mutilations—all of which led him to the conclusion that the aliens are here, and they aren't friendly. He believes it is time the British government and the world in general rally to confront the invaders. The author openly compares himself to Fox Mulder of TV's X-Files in his struggles to bring forth the hidden evidence of the security danger to planet Earth... Although numerous incidents are cited, actual evidence is lacking, and logic is often absent from the author's arguments.

Not exactly hard proof of anything other than the fact that Pope is good at spinning a narrative to win publicity. As fellow DISCOVER blogger Phil Plait put it:

It doesn’t matter who believes in aliens. What matters is — hello! — evidence. Show me the clear pictures. Sh[ow] me to nonterrestrial-isotope-laden artifacts. Show me a frakkin’ flying saucer sitting on the White House lawn. Show me anything other than blurry pictures and videos, eyewitness testimony, and black-out government documents.

Before we start diverting billions of already-stretched government dollars into an anti-UFO military program, it seems like a good idea to stick to Phil's advice. Image: iStockPhoto