For the First Time, Astronomers Observe the Phases of a Red-Hot Exoplanet 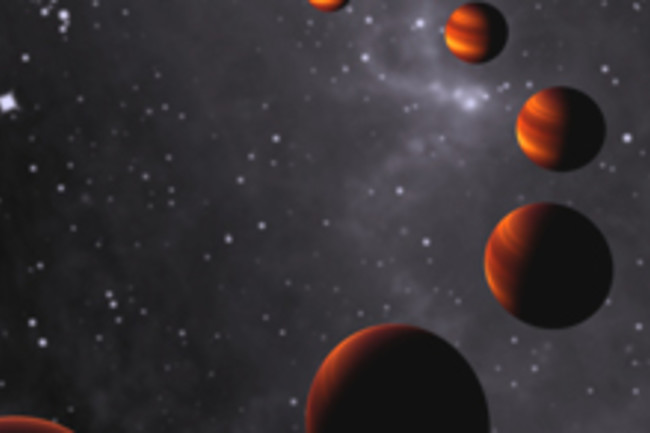 Four hundred years ago, Galileo observed the phases of Venus as the planet orbited our sun and caught its light in different ways, helping to disprove the idea that all celestial bodies twirled around the Earth. Now, the professional descendants of Galileo have observed the phases of an exoplanet for the first time, observing the distant planet in the act of orbiting a foreign star. The planet, CoRoT-1b, is about 1,600 light years away from Earth, and was discovered about 2 years ago. It's a "hot Jupiter," a class of exoplanets that are

the size of Jupiter but orbit very closely to their stars (CoRoT-1b orbits its star in just 36 hours). Hot Jupiters are expected to be tidally locked, with one side always facing their stars, the other permanently dark (our own moon is tidally locked with the Earth, only showing its "near side" to us) [SPACE.com].

collected visible light readings from COROT-1b over the course of 36 of its orbits. The team observed a contrast in brightness between the two sides that creates phases as the planet orbits its star. These phases are similar to the phases of the planets Mercury and Venus as seen from Earth [National Geographic News].

While researchers had previously taken infrared measurements of the planet's light and dark phases, the new study, published in Nature, is the first to study the phases in optical wavelengths. The study revealed that the side of the planet facing the sun is searingly hot, with temperatures reaching about 3,600 degrees Fahrenheit on that side, but peaking at around 2,200 degrees Fahrenheit on the dark side. The study

also shed light on the atmosphere of the exoplanet and suggest that there is not a lot of transfer of heat from the dayside to the nightside of the planet. Another observed exoplanet had less of a heat difference between its two sides, suggesting that wind was transporting the incoming solar energy, but "for this planet, that is apparently not the case" [SPACE.com]

, says lead researcher Ignas Snellen. The findings show CoRoT-1b to be a decidedly inhospitable place. Astrophysicist Michael Ireland comments that the planet is

"a known freak. It is the seventh closest hot Jupiter to its host star, and its host star is hotter than most," says Ireland. "With both the temperature of the host star and the small star-planet distance taken together, this is one of the hottest hot Jupiters known." He says the findings show the planet is "literally glowing red hot" [ABC Science].

Related Content: 80beats: New Telescope Could Reveal a Milky Way Packed With Habitable Planets 80beats: Small, Rocky Exoplanet Is the Most Earth-Like World Ever Seen 80beats: First Ever Weather Report From an Exoplanet: Highs of 2240 Degrees 80beats: Hubble Reports First Ever Signs of Carbon Dioxide on an Exoplanet DISCOVER: How Long Until We Find a Second Earth? DISCOVER: The Man Who Made Stars and PlanetsImage: Leiden Observatory, Leiden University