For the First Time, Astronomers Measure the Mass of a Star Using General Relativity 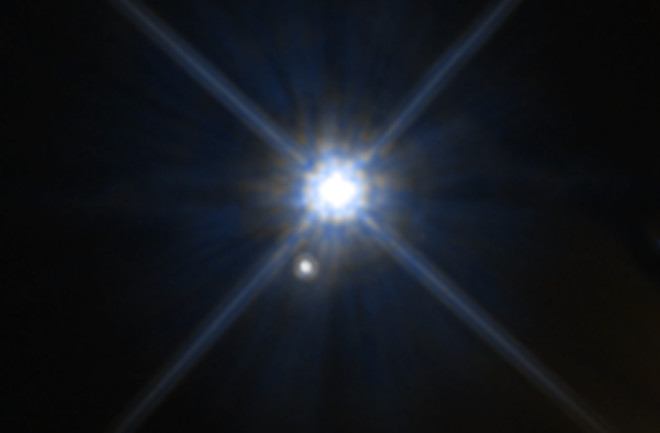 The white dwarf Stein 2051 B, and the background star, visible as a small dot, that allowed its mass to be measured. (Credit: NASA, ESA, and K. Sahu (STScI)) For the first time, astronomers have measured the mass of a star by observing the way its mass deforms light passing by it. It's an observation that Einstein predicted but thought could never actually happen, due to the incredibly precise alignment between distant astronomical objects it entails. But using modern observing tools, researchers recently found and tracked two distant stars as they lined up almost perfectly.

Though the stars were thousands of light-years apart, measuring how the more distant star appeared to skirt the oncoming object allowed researchers from Canada and the U.S. to obtain an accurate estimate of the nearer star's mass, providing astronomers with crucial insights into a star's lifecycle. They published their work today in Science. The technique is called gravitational lensing, and its application dates all the way back to 1919, when a solar eclipse occasioned the observation of stars shifting position in the sky as their light passed through the sun's gravitational field. The discovery made Sir Arthur Eddington an instant celebrity by experimentally validating Einstein's fledgling theory of general relativity. As a refresher: Einstein's theory states that massive objects bend spacetime more than the Newton's laws of gravity predict, causing objects, including photons, to curve inward as they travel near them. The technique is used today to measure the mass of far-away galaxies, nebulas and other massive objects.

An illustration showing how the white dwarf star bends the light of the star behind it. (Credit: NASA, ESA, and A. Feild (STScI)) As the distant object, whose light is being bent, gets passed over, it will appear to change position in the sky, and even sometimes change shape. Astronomers have spotted halos, crosses and even smiley faces in the sky created as starlight gets bent and scattered in new ways. If the two objects are slightly off-center from each other, the distant star will sometimes appear to move in an ellipse as the nearer object passes, which is what the researchers saw here.

By measuring the apparent shift in light, the researchers determined how massive white dwarf 2051 B, the object doing the bending, is. They found that it is 68 percent the mass of our sun, and was about 2.6 times more massive before it reached the end of its life. This is important because measurements of white dwarfs are few and far between in the universe. Most measurements come thanks to binary star systems, which are fairly rare. Obtaining new measurements both validates the method's usefulness and adds to our understanding of white dwarfs, which are the stellar remnants of stars that have reached the end of their lives and burned out. Most stars in the universe are destined to become white dwarfs one day, along with our own sun. Because they represent the remains of very old stars, white dwarfs give us clues about the early days of the universe, and reveal how stars evolve as they reach the end of their main sequence. This is the first time such an observation has been made because watching one star eclipse another in the sky happens so rarely. The two objects must line up perfectly in a space far smaller than what out eyes can pick out unaided, and even with the billions of stars visible to us, finding when and where that will happen is very hard. Using the Hubble telescope, the researchers caught a glimpse of this rare phenomenon after surveying a collection of 5,000 stars and predicting if any would obscure another star. Using this technique, they accurately predicted when 2051 B would pass in front of a more distant star and made a series of observations over two years as it happened. They plan to continue using Hubble and other telescopes to find similar instances, although such observations will still likely remain rare.