For Mars, NASA Is Thinking Nuclear 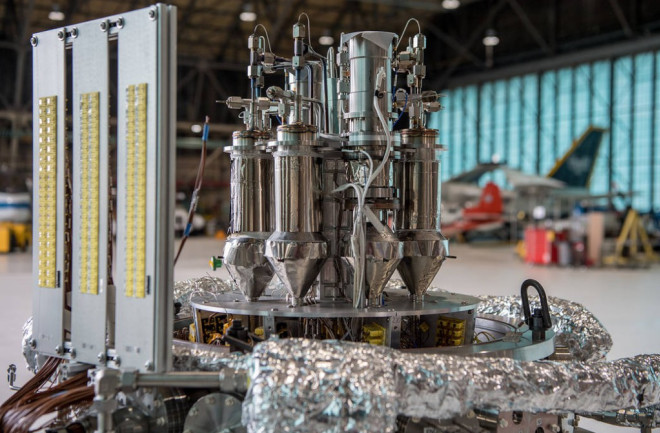 NASA's Kilopwer prototype. (Credit: NASA) Everyone knows NASA has a tough job. Slipping “the surly bonds of Earth” is just the beginning for them. And while getting to the moon, and even Mars, is technically possible right now, one of the biggest problems remains finding and using a decent power source. So why not use nuclear power?Nuclear Know-how No, really. A small nuclear reactor might be the perfect solution, in addition to being pretty safe and clean. Nuclear power, unlike the weaponry, is actually one of the safest energy production methods we have. And according to a NASA press conference Thursday, they’ve been a testing nuclear reactor for Mars. Named Kilopower, the device is a combination nuclear reactor and engine. It has very few moving parts and is fairly compact, providing a portable and reliable source of power. Any future settlements on a world far, far away will need a bunch of it not just for their daily operations — lights, water, oxygen — but for the return trip as well. Gasoline and rocket fuel do the job now, but they’re heavy and bulky, so Kilopower would make planning these sci-fi cities much more efficient. Kilopower’s Killer App Two of the presenters at NASA’s conference, Pat McClure and Dave Poston, both of Los Alamos National Lab, went into detail on how Kilopower works on a guest post on Space.com:

The sealed tube in the heat pipe circulates a fluid around the reactor, picking up the heat and carrying it to the Stirling engine. There, the heat energy pressurizes gas to drive a piston coupled to a motor that generates electricity. Using the two devices in tandem creates a simple, reliable electric power supply that can be adapted for space applications, including human exploration and space science missions to outer planetary bodies like the moons of Jupiter and Saturn.

The machines can generate up to 10 kilowatts nonstop for at least 10 years, so stringing together four could supply the roughly 40 kw NASA estimates a human settlement would need. All the tests so far have gone well, and they should conclude with a full power test in late March. If all goes well, we’ll be that much closer to exploring the solar system. It’s so nice when technology finally starts catching up with our science-fiction dreams.