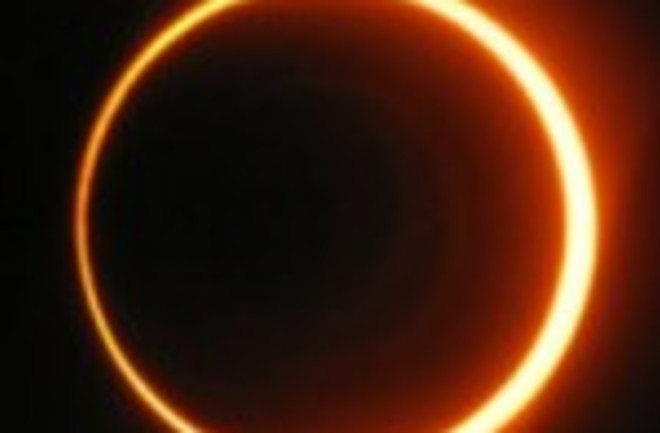 I wrote earlier about the annular eclipse happening this coming Sunday. It's a solar eclipse, with the Moon blocking the Sun, but because the Moon is at apogee -- the point in its orbit farthest from Earth -- the Moon appears smaller in the sky, so it doesn't completely block the Sun. We're left with a ring of solar surface surrounding the Moon, the so-called Ring of Fire. I got a couple of people asking me why this eclipse is happening at lunar apogee when we just had a "Supermoon", when the Moon was full at perigee (when it's closest to Earth in its orbit). This is a good question! It's not a coincidence. In fact, it must happen this way! Here's why. First, here's a drawing of the Moon's orbit, courtesy NASA:

The Moon orbits the Earth in an ellipse, so sometimes it's closer to us, and sometimes farther. The ellipticity is exaggerated in the drawing; it's actually about a 10% difference in distance between apogee and perigee. The Moon orbits the Earth once every 27.3 days, so it takes about 13.7 days for it to go from apogee to perigee -- a little less than two weeks. This is different than the phase of the Moon, which is how much of the Moon we see lit by the Sun. When the moon is between us and the Sun, it's new: we only see the unlit side. When it's opposite the Sun in the sky -- when the Earth is between the two -- the side of the Moon we see is lit, so we say it's full. There are approximately 8 billion web pages describing how this works; here's one I wrote. The time it takes to go from full Moon to full Moon is 29.5 days. That means to go from full Moon to the next new Moon takes half that time, or about 14.7 days -- a little more than two weeks. We can only get a solar eclipse when the Moon is between us and the Sun. This happens when the Moon is new (I'll note in passing that it doesn't happen every time the Moon is new, because the orbit of the Moon doesn't align exactly with the Earth's orbit around the Sun). The phases of the Moon don't line up perfectly with its position in the orbit because of the two different periods: 27.3 days to go around the Earth, but 29.5 days to go from full to full again (this video might help you). So sometimes full Moon happens at perigee, sometimes at apogee, and most of the time sometime in between. Now let's put this all together! The Supermoon is when the Moon is full and at perigee, right? That's what happened on May 5th. On Sunday, a bit more than two weeks will have elapsed since then. That means the Moon will have moved halfway around its orbit -- it actually reaches apogee on Saturday May 19th. But the phase has been changing, so it's new on May 20, and it so happens that things have aligned for it to eclipse the Sun. Since this happens the day after apogee, the Moon is farther away than usual, and from Earth it looks smaller. BOOM. Annular eclipse. I think the confusion stems from folks not knowing the Moon orbits the Earth once per month on an ellipse, so it goes from perigee to apogee in two weeks. Once you get that, hopefully the rest of this makes more sense. And because why not, I'll leave you with this video showing the phase of the Moon as well as its apparent size in the sky as they change over the course of the year. If you want a detailed explanation of what you're seeing, here ya go.

Enjoy the eclipse! And make sure if you watch it, you do so safely

Related Posts: - Ring of fire eclipse on May 20 - Solar eclipse, from space! - Newest of new moons - Record breaker: newest new Moon spotted! - What does a lunar eclipse look like from the Moon?