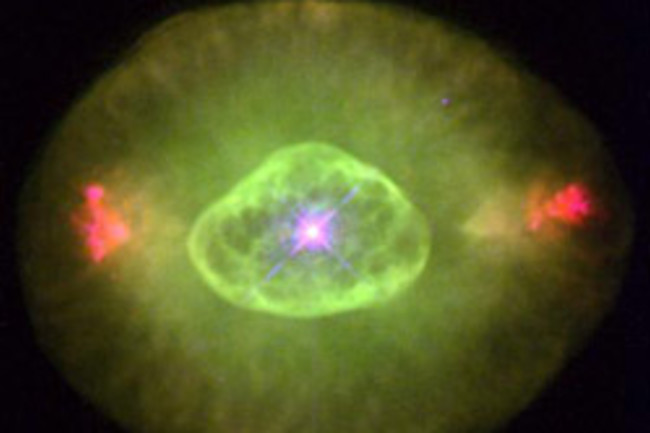 Low-density gas clouds, like NGC 6826 (which I studied for my Masters degree, incidentally), emit light in a very different way than stars do; they aren't blackbodies at all. They are more like fluorescent lights, giving off lights at very specific colors, and not continuously across the spectrum. If the cosmic gas is hot, and contains oxygen, the nebula can strongly emit light at about 500 nanometers, smack in the green part of the spectrum. They also emit some red and other colors, but they don't emit across the entire spectrum like stars do. These objects do in fact look very green through the telescope, but remember, they're not stars! The planet Uranus looks green too, but that's because its upper atmosphere has lots of methane, which absorbs red light. Again, it's not a star so it doesn't count. Now, I do have to say, there is a way for some stars to kinda sorta look green. We sense colors not just on an absolute scale, but also by comparison as well. An object that looks one shade of red by itself will look a different shade if you put it next to a yellow object. Your eyes and brain together can be fooled this way. Almach is multiple star system in Andromeda (though to the eye it looks like just one star), and its components do just this. The brightest star is an orange giant, a star like the Sun that's dying. It's cooler than the Sun, and so looks orange to the eye. The other three stars comprising the Almach system are white dwarfs, dead stars that glow due to their leftover heat. Two of them are barely separable by telescope, and the third orbits one so closely it's impossible to see. But the combined light of these three stars is whitish... but when you look at it through a telescope, with the orange star visible as well, the trinary takes on an emerald green glow! It's not real, in that it's an illusion, but it does still look green. Interestingly, in all the images I found, it looks bluish; maybe the camera is not as easily fooled as our brains. Other examples of multiple stars like this can be found, too. But is there a star that's intrinsically green? Zubeneschamali is the second brightest star in the constellation of Libra. It's somewhat hotter than the Sun, and some people claim it looks green to them, while other say it looks white. It's unclear why; some people's sensitivities are different, but it might also have to due with the star itself: Zubeneschamali is a young star and a rapid rotator, which might affect its colors (the emitted light from a star is not really a blackbody, and its youth and rotation might have some influence on its emitted colors). So maybe, maybe, there is one intrinsically green star, but even then it's controversial. There are several lessons here. One is that stars really can't be intrinsically green; they need to be seen against a contrasting color to look green, and even then it's just a trick. Also, there are green objects in space, but they are very different than stars (gas clouds and planets). And finally, the color we see from an object depends on how that object emits light, which can be just as important as the light emitted itself.