Flushing out an equatorial fraud

[That tweet was from Minute Physics, a great channel on YouTube which does very short, informative, and fun animated physics videos.]

Intrigued, I clicked the link and watched this video. I describe it below. [You may have to refresh the page to get the video to load; if you see a blank spot beneath this then refresh.]

Not really. It’s totally bogus! And I’m happy to explain how.

Here’s the deal. The trick plays on the idea that people think water will drain (or flush in a toilet) one way north of the equator, and the other way south. Most people know hurricanes rotate one way (counterclockwise) in the north and the other (clockwise) in the south, so there’s some basis for this. The reason cyclones spin opposite ways in opposite hemispheres is due to the Coriolis effect, which I’ve explained in detail both on this blog and on my old website.

Read those explanations first if you’d like, but you don’t need to understand the Coriolis effect in detail here. All you need to know is that over the size of a water basin, the Coriolis force has no effect. I mean it: none. Any random eddy or movement of water in the basin is hugely more important than the teeny tiny effect of the rotating Earth on the basin.

So how does this work then?

Watch the guy working the ruse carefully. First he goes through a show of finding north, and locating the position of the Equator. This is all simply for show. As you’ll see in a second, this exact trick will work anywhere, not just on the Equator. I could do it in Boulder, at a latitude of 40° north!

He goes first to a basin on the Equator. It’s already filled, and the video jumped right before that, so I don’t know if he filled it right before draining it, or if it was sitting there for a while already filled. My guess is it had the water sitting for awhile — you’ll see why in a second. When he pulls out the plug the water drains straight down. OK.

He then grabs the basin and bucket and moves a few meters south. Watch very carefully what happens then: he pours the water from a bucket, making sure the water is flowing in to the left of the drain hole: 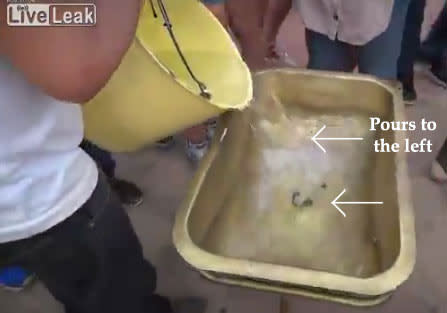 I’ve noted with an arrow where the plug is, and where he’s pouring the bucket.

When he does this, it sets up a natural clockwise spin to the water overall; it hits the back of the basin and will flow to the right from there. At least some of the people around him don’t notice this, though, since you can hear them talking excitedly about it.

Now watch again starting at 1:40 when he moves the basin to the north of the Equator. It’s hard to see, but you do very certainly see him pouring the water to the right of the drain hole: 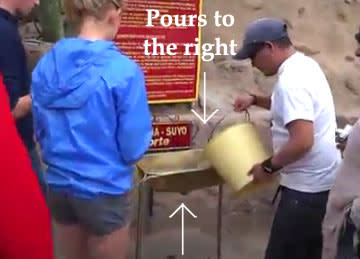 See? That naturally sets up a counterclockwise rotation to the water! It has nothing to do with where the basin is; if he swapped the two locations but still poured to either side of the drain hole, the water would do exactly the same thing!

As for the water in the basin on the Equator, that’s why I think it was sitting for awhile first: he probably filled it carefully so there was no circular motion of the water. That way, when it drains, it drains straight down.

One thing I want to point out here: that guy knows exactly what he’s doing. He has to, to make it work. So at the very least, this is a trick. If he’s asking for money, though, and not explaining it, then in my opinion it’s just plain old fraud. Of course it’s not like he’s the first guy to take advantage of tourists! Caveat emptor, of course. But then, caveat venditor, too. Because there are folks like me who are fond of lux et veritas*.

My point is simply this: it’s easy to fool people, and it’s really easy to fool them if they already have some vague knowledge of how things are "supposed" to be. By coincidence, my friend James Randi wrote about this very topic for Wired magazine recently. It’s worth a read.

I’ll note — speaking of separating people from their money — that I have a whole chapter in my book Bad Astronomy debunking exactly this type of thing, though the person in the example I used had a slightly different technique.

But the bottom line is this: for hurricanes and shooting cannon and launching missiles, yeah, the Coriolis effect is important. For draining sinks and flushing toilets, though, it’s all a matter of spin.