Flashback Friday: Want to cure your fear of spiders? Just look at this picture of Bob Marley. 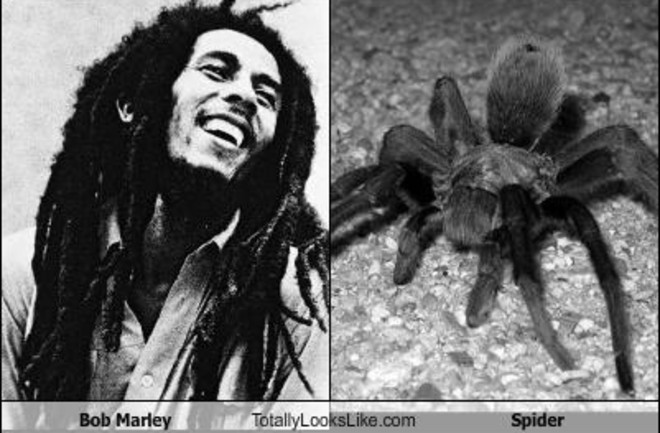 Therapies for arachnophobia typically involve exposure—the more you face something, the less frightening it becomes. But what if someone is so afraid of spiders that even imagining them is too much to handle? These researchers came up with a new strategy: just expose people to things that kind of look like spiders. Participants were given a CD containing a slideshow of images ranging from the Atomium in Brussels to a Rastafarian, which they were instructed to watch twice a day for a month. Apparently, the approach worked — six months later, “six patients of [the 13-patient treatment] group opened the lid of the tarantula cage, and, of these, three touched the tarantula.”

We describe a new arachnophobia therapy that is specially suited for those individuals with severe arachnophobia who are reluctant to undergo direct or even virtual exposure treatments. In this therapy, patients attend a computer presentation of images that, while not being spiders, have a subset of the characteristics of spiders. The Atomium of Brussels is an example of such an image. The treatment group (n = 13) exhibited a significant improvement (time x group interaction: P = .0026) when compared to the placebo group (n = 12) in a repeated measures multivariate ANOVA. A k-means clustering algorithm revealed that, after 4 weeks of treatment, 42% of the patients moved from the arachnophobic to the nonarachnophobic cluster. Six months after concluding the treatment, a follow-up study showed a substantial consolidation of the recovery process where 92% of the arachnophobic patients moved to the nonarachnophobic cluster.

Bonus figure from the main text: