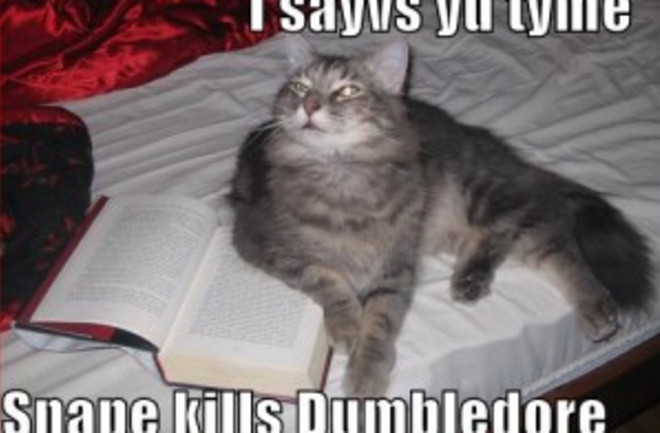 Photo: cheezburgerAre you one of those people who avoids spoilers at all costs, even going so far as to block people from your Facebook and Twitter feeds who give away the plot of Game of Thrones? If so, listen up -- contrary to what you might think, it turns out that avoiding spoilers might not be worth the trouble. According to this study, "spoilers may allow readers to organize developments, anticipate the implications of events, and resolve ambiguities that occur in the course of reading." In other words, spoilers can actually make you enjoy the story more because you know where the author is going and can appreciate the hints that are given along the way. Whether, as the authors suggest, "birthday presents [might also be] better when wrapped in cellophane" remains to be determined.Story spoilers don't spoil stories. “The enjoyment of fiction through books, television, and movies may depend, in part, on the psychological experience of suspense. Spoilers give away endings before stories begin, and may thereby diminish suspense and impair enjoyment; indeed, as the term suggests, readers go to considerable lengths to avoid prematurely discovering endings … However, people’s ability to reread stories with undiminished pleasure, and to read stories in which the genre strongly implies the ending, suggests that suspense regarding the outcome may not be critical to enjoyment and may even impair pleasure by distracting attention from a story’s relevant details and aesthetic qualities … We conducted three experiments, each with stories from a different, distinct genre, to test the effects of spoilers on enjoyment. …Writers use their artistry to make stories interesting, to engage readers, and to surprise them, but we found that giving away these surprises makes readers like stories better. This was true whether the spoiler revealed a twist at the end (e.g., that the condemned man’s daring escape is just a fantasy as the rope snaps taut around his neck) or solved the crime (e.g., Poirot discovers that the apparent target of attempted murder was in fact the perpetrator). It was also true when the spoiler was more poetic, as when frisky adolescents watching a couple struggle with a baby are revealed to be previewing their own futures, and the couple glimpsing their own pasts. In all these types of stories, spoilers may allow readers to organize developments, anticipate the implications of events, and resolve ambiguities that occur in the course of reading….Erroneous intuitions about the nature of spoilers may persist because individual readers are unable to compare spoiled and unspoiled experiences of a novel story. Other intuitions about suspense may be similarly wrong: Perhaps birthday presents are better when wrapped in cellophane, and engagement rings when not concealed in chocolate mousse.” Related content: Friday Flashback: Times New Roman may be funnier than Arial, but why does Comic Sans make me want to kill myself?NCBI ROFL: The science of Harry Potter!NCBI ROFL: Study shows reading Twilight makes you more vampiric.