Flashback Friday: Here's a list of what's currently living in your belly button. 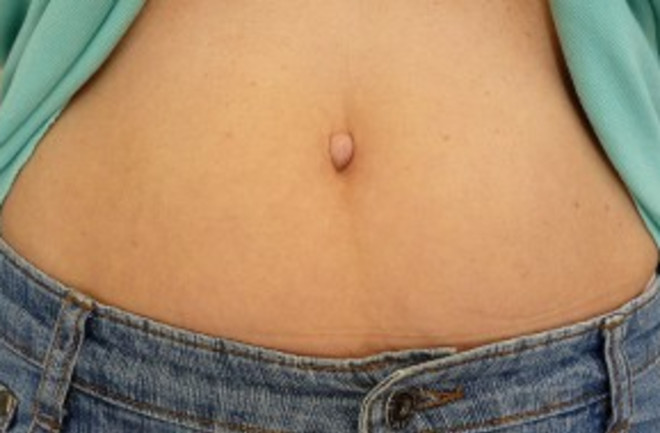 Have you ever wondered what exactly is inside your belly button? Well, besides the lint (which is mostly derived from actual lint), there is a whole ecosystem of microorganisms that call the navel their home. The authors of this study used DNA sequencing to identify these organisms, determining that the belly button microbiome is dominated by a few common members (see excerpt below), but the remaining species are diverse. The most surprising result, however, was the discovery of two different types of Archaea (a domain of single-celled organisms often found in extreme environments such as hot springs and not previously reported on human skin) from "an individual who self-reported not having showered or bathed for several years." Talk about an "extreme environment"-- I just feel sorry for whoever had to swab that person's belly button!

A Jungle in There: Bacteria in Belly Buttons are Highly Diverse, but Predictable "The belly button is one of the habitats closest to us, and yet it remains relatively unexplored. We analyzed bacteria and arachaea from the belly buttons of humans from two different populations sampled within a nation-wide citizen science project. We examined bacterial and archaeal phylotypes present and their diversity using multiplex pyrosequencing of 16S rDNA libraries. We then tested the oligarchy hypothesis borrowed from tropical macroecology, namely that the frequency of phylotypes in one sample of humans predicts its frequency in another independent sample. We also tested the predictions that frequent phylotypes (the oligarchs) tend to be common when present, and tend to be more phylogenetically clustered than rare phylotypes. Once rarefied to four hundred reads per sample, bacterial communities from belly buttons proved to be at least as diverse as communities known from other skin studies (on average 67 bacterial phylotypes per belly button). However, the belly button communities were strongly dominated by a few taxa: only 6 phylotypes occurred on >80% humans. While these frequent bacterial phylotypes (the archaea were all rare) are a tiny part of the total diversity of bacteria in human navels (<0.3% of phylotypes), they constitute a major portion of individual reads (~1/3), and are predictable among independent samples of humans, in terms of both the occurrence and evolutionary relatedness (more closely related than randomly drawn equal sets of phylotypes). Thus, the hypothesis that “oligarchs” dominate diverse assemblages appears to be supported by human-associated bacteria. Although it remains difficult to predict which species of bacteria might be found on a particular human, predicting which species are most frequent (or rare) seems more straightforward, at least for those species living in belly buttons." Bonus excerpt from the main text: "From a taxonomic perspective, the frequent, abundant phylotypes encountered were dominated by well-known skin bacteria, specifically Staphylococci, Corynebacteria, and several genera of Actinobacteria (e.g., Micrococcus) and Clostridiales (e.g., Anaerococcus, Finegoldia, Peptidophilus), Bacilli, as well, to a lesser extent, Gammaproteobacteria (e.g., Acinetobacter). This composition corresponds to the previously reported composition of the skin microbiome in deep sequencing studies [1], [3], [26]. Interestingly, it is also very similar to the taxa recorded in a culture-based study of skin samples from humans in our same study region of North Carolina [26]. The most common skin bacteria in that study were lineages of Staphylococcus, Micrococcus (within the group Actinobacteria above), Bacillus (Bacilli above) and then Acinetobacter, Klebsiella, Streptomyces and Enterobacter. The frequently encountered genera in the 1975 culture-based study were all also frequently encountered here with the exception of Streptomyces, and Enterobacter which were present in the belly button samples but not common and Klebsiella which was absent from our samples. The quantitative dominance of Corynebacteria in bellybuttons is also in line with a previous report [4]. Of special note are three phylotypes of Archaea, a domain of life often found in extreme environments and not previously reported from human skin [1], [27], multiple phylotypes of which we isolated from two independent samples (see online Supporting Information S1). Two of these three phylotypes were from an individual who self-reported not having showered or bathed for several years." Related content: NCBI ROFL: On the purpose of the belly button.NCBI ROFL: The nature of navel fluffSignificant changes in the skin microbiome mediated by the sport of roller derby.