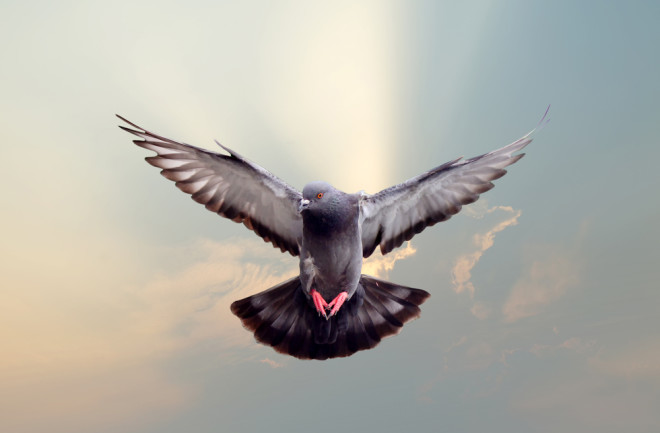 Imagine you are kidnapped, blindfolded and driven hundreds of miles from your home before being released. You have no idea where you are, but luckily your kidnappers have left you a compass. How do you get home?

This is the situation that homing pigeons and other migratory creatures regularly find themselves in. Scientists have long understood that these creatures somehow sense the Earth’s magnetic field and that this built-in compass gives them the information they need to navigate.

The problem, of course, is that a compass reading by itself is not enough. To find your way home, you need additional information such as a map or at least a bearing on which to travel.

Nevertheless, birds and insects regularly perform extraordinary feats of navigation to precise locations from one side of the planet to the other. Clearly, they must have some additional supersense they can bring to bear on the problem of navigation. Just what this supersense might be is one of the great problems of biology.

Now we have a potential answer thanks to the work of Xin Hao at Zhejian University in China, and colleagues, who have discovered an entirely new mechanism that can explain the way birds navigate. This mechanism also explains the discovery several years ago that birds become confused by oscillating magnetic fields of specific frequencies.

The new mechanism is based on the characteristics of a rod-like protein discovered in the retinas of pigeons. This protein — called MagR — contains a cluster of iron and sulfur atoms. The iron, in particular, made biologists think the molecule could be sensitive to the Earth’s magnetic field and therefore act as a biocompass.

But Xin and colleagues say the ferric sulfide clusters allow a more capable form of navigation to take place. The mechanism rests on the fact that this cluster can fluoresce with a spectrum that consists of three colors — a central peak plus two fainter side-peaks.

A key idea is that this system becomes tuned to the Earth’s magnetic field wherever the bird is born and raised. This becomes a kind of benchmark and any movement away from this location causes the fluorescence to diminish.

That process makes possible an entirely new form of navigation. To get home, birds simply fly in the direction that moves the peaks closer together.

This is the new supersense that Xin and co say birds must use to navigate. “The birds can navigate to their destination through an entirely new scenario to sense the geomagnetic field,” they say.

The new explanation overcomes many of the problems with current theories of magnetoreception. One problem is that the chemical reactions behind biocompasses are weak and so difficult to sense. By contrast, the fluorescence of ferric sulfide is relatively strong and since it occurs in the retina, it is reasonable to assume the birds can "see" it.

But the main problem is that a compass reading alone cannot tell you the way home. Xin and co’s new method of navigation does just that.

The new theory also explains the observation that birds become disorientated by magnetic fields oscillating at specific frequencies. This occurs when the oscillation rate corresponds to the frequency at which the iron sulfide atoms precess in the field, the so-called Larmor frequency. When this happens, the molecules no longer behave in a way that can be exploited for navigation.

Given the details from the original experiment, Xin and co calculate the Larmor frequency to be 1.3199 MHz and 2.6398 MHz for ferric sulfide atoms. These numbers are remarkably close to the observed values of 1.315 MHz and 2.63 MHz and significantly closer than the Larmor frequencies for electrons – 1.288 MHz and 2.576 MHz – to which the experimenters originally attributed the phenomenon.

That’s fascinating work providing an entirely new insight into bird navigation. But this theoretical approach is only a start. It neatly solves the fundamental problem of navigation and it also shows that birds could use this mechanism, since pigeons certainly have the MagR protein in their retinas.

However, it does not prove that birds actually use this mechanism. That’s a much more difficult experimental task that will require detailed behavioral studies.

There are also several outstanding questions related to bionavigation that this mechanism does not directly tackle. For example, what other creatures have the MagR protein? Do insects use it and if so, how? Monarch butterflies, for example, migrate vast distances down the west coast of North America and then return three or four generations later to the same trees they originally left. How can this geographic information be passed from one generation to the next?

These and other questions will occupy biologists for some time to come. Nevertheless, Xin and co’s work is significant step forward. And for any engineers with some time on their hands, it also provides a mechanism that could be exploited in navigational technologies; for example to give free-flying drones, some of which are now the size of small birds and insects, a mechanism to find their way home.