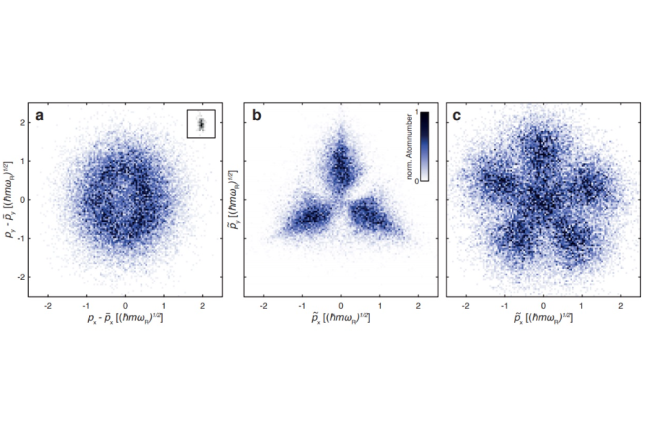 The Pauli Exclusion Principle is one of the most important and well-studied consequences of quantum mechanics. It states that fermions — particles like electrons — cannot occupy the same quantum state. And it has profound consequences.

One of the most famous is the structure of the atom. The exclusion principle ensures that electrons occupy different orbits around a nucleus. This kind of self-ordering is why atoms have volume and why two of them cannot both be in the same place at the same time. It’s why we can’t walk through walls.

But, in recent years, physicists have begun to think of other, more subtle consequences of the principle. A couple of years ago, they predicted that this self-ordering ought to work when fermions are trapped in other circumstances. Then, they ought to form crystals with a specific, unique geometry.

Of course, the circumstances in which this can happen are hard to create. Indeed, nobody has been able to observe Pauli crystals ... until now.

Unlike ordinary crystals, where the structure emerges from the interaction between particles, in Pauli crystals, the self-ordering emerges in the absence of interaction. This complete lack of interaction makes the experiments difficult to set up. “The detection of Pauli Crystals imposes rather challenging requirements on experiments and an experimental observation has been missing to date,” says the team.

The best-known fermions are electrons. But these have a powerful negative charge that would overwhelm the subtle self-ordering effect of the exclusion principle. But some atoms are composite fermions and electrically neutral. One of these is lithium-6.

The principle is relatively straightforward. The team uses lasers to trap a cloud of ultra-cold lithium-6 atoms in a flat, two-dimensional layer. The lithium-6 atoms are cooled to their lowest energy states so that they must then obey the exclusion principle and so self-order into certain patterns.

Of course, in any cloud, there will always be atoms in different states. So the trick is to find a way to observe only those in the same state at the same time. This turns out to be possible because the state of the atoms determines the wavelength of light they emit.

So, by looking for a specific wavelength of emitted light, the team is able to photograph the position of all atoms in a particular state at a certain instance, while ignoring the others.

And they do this on an impressive scale, taking 20,000 of these images and then selecting those showing the correct number of atoms for the exclusion principle to be observed.

After some further processing to subtract the overall momentum of the cloud of atoms, and to rotate the images so they are properly aligned, the team then superimposes many thousands of these photos to reveal the momentum distribution of the atoms.

That’s when the crystalline structure suddenly becomes visible, based on the way the particles must avoid each other (see image). “Due to Pauli’s principle, they avoid each other and form exactly the geometric structures that have been predicted and termed Pauli Crystals,” say Holten & Co.

That’s an interesting and beautiful result, and one with significant potential. The team points out that that, by scaling up their experiment, they can study other effects that are known to emerge in fermionic gases.

One of these effects is superconductivity which comes about in certain metals when electrons form into Cooper pairs. The team say their method should allow them to study the emergence of these pairs. “Our work lays the foundation for future studies of correlations in strongly interacting systems of many fermions,” they say.

It’ll be interesting to see what they find.