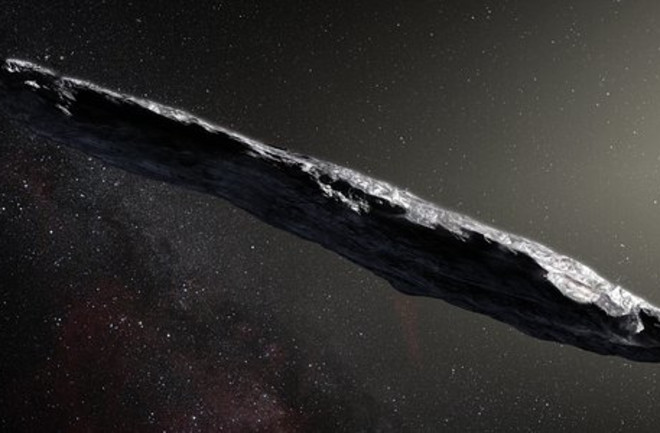 An artist's impression of the asteroid `Oumuamua. It's around ten times as long as it is wide. (Credit: ESO/M. Kornmesser) Scientists now have an idea of what the first recorded extra-solar asteroid looked like. The hunk of rock of that whipped through the solar system in October looks like no other asteroid we've seen before, they say, long and thin like a javelin and colored red from millions of years of accumulated radiation exposure. The coloration wasn't surprising, but the shape was, say astronomers from the European Southern Observatory. Most objects astronomers observe in our solar system are roughly spherical, drawn into a ball by gravity. This asteroid, now named `Oumuamua, is about 10 times as long as it is wide, according to research published Monday in Nature. `Oumuamua is also spinning rapidly, something that helped clue astronomers in to its shape. During the few weeks when it was visible, it varied wildly in brightness, consistent with an elongated object that's rotating about its axis. Further observations with the Very Large Telescope in Chile revealed that `Oumuamua is made of dense metal or rock and completely inert, meaning that no clouds of dust or ice surround it. The roughly quarter-mile-long asteroid was initially thought to be a comet, but the absence of water ice as it neared the sun dismissed that theory. Though this was the first time astronomers have spotted an interstellar visitor, they're likely not uncommon. Estimates range from one to ten per year, and with new, more powerful telescopes, astronomers hope to see more of them in the near future. These objects, usually identified by the highly angled paths they take through our solar system, could provide clues about the composition of far-off solar systems. Planetary systems, our own included, will occasionally cast out comets and asteroids as a result of gravitational interactions with larger bodies, and they can travel through interstellar space for millions of years before encountering another system. These visitors usually only stay for a few weeks at most, careening around the sun and speeding back out into the cosmos; a brief moment of contact and another ten million years of silence.