The very first image of a planet orbiting a star other than the Sun has been confirmed. They really did it; they bagged a planet! I won't keep you in suspense: here is the picture: 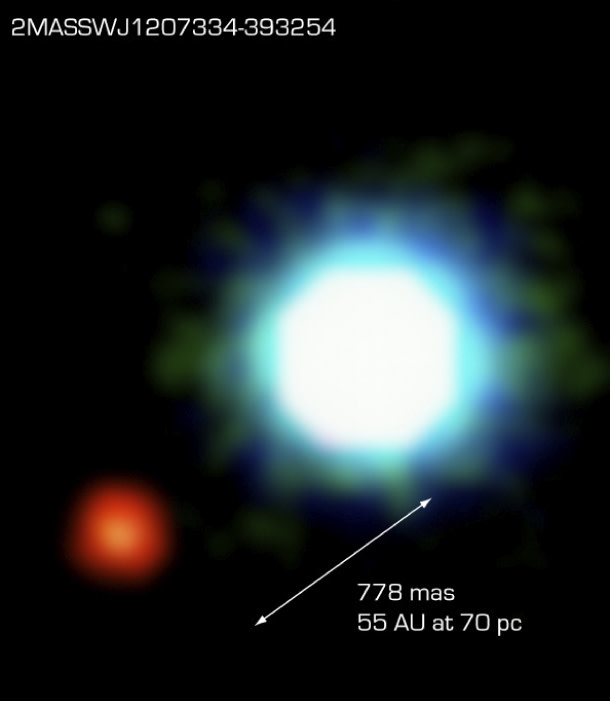 The planet is the red fuzzy blob to the lower left of the blue fuzzy blob. The blue blob is the parent star, and is a brown dwarf, a very low-mass star (it looks blue because this is a false-color image). The planet has about 5 times Jupiter's mass, well within the range of being a planet and way too low to be even a brown dwarf, let alone a star. It orbits the star at about 1.5 times the distance Pluto orbits from the Sun. The two are close by as these things go: just 70 parsecs (230 light years) from here. So how do we know that's a planet? Ah, it's a fine story to tell. Have a seat and get comfy; this'll take a while. We've known about other planets for some time now. The first were discovered in 1990, orbiting, of all things, a pulsar, a dead star. These are pretty interesting planets, given their circumstances, but they are not orbiting a sunlike star (though I highly recommend reading the story behind the discovery, it's a grand tale, full of real science and real scientists). The first planets orbiting stars like the Sun were found in 1995. They were not seen directly, but only through their influence on their parent star. A star, of course, has lots of gravity, so the planet orbits the star in a big circle (or ellipse). But the planet has gravity too, which tugs on the star. It's like two people, one big and one small, locking hands and swinging around each other. The little one makes a big circle, and the big one makes a little circle. As the star moves, this motion is betrayed through the Doppler shift, the same effect that makes a race car go "EEEEEEEEooooooowwwwwwwrrrrrrrrrrr" as it zips past you. When the star moves toward us in its tiny orbit around the planet (if you want to think of it that way), the Doppler shift means its light gets a wee bit bluer. When it moves away from us, the light gets a bit redder. This shift is incredibly small, and takes fantastically sensitive instruments to detect it. That technology only became available 10 years ago, and we've come pretty far: over 150 planets have been found this way. While this is fantastic, it still leaves us semi-evolved apes dissatisfied: we want to see something! Those detections come about as plots of sine waves and wiggly lines. I wanna see a planet! Heehee. Now I can. This is so cool! OK, I got distracted there. Back to the story. There has been something of a race to get the first image of a planet around another star. I played a minor role in this race. When I worked on a camera onboard Hubble, we wondered if we could image a planet orbiting the nearest sunlike star, Alpha Centauri. I wrote some programs to simulate how the camera worked, and I determined that we might, might, just barely, detect one if the conditions were just so. But it would have been an extremely difficult observation, and we couldn't convince the folks who controlled Hubble to do the observation-- I really don't blame them, given how monumentally hard this observation would have been , for so low a chance of success. We did search other, nearby stars, and never found one (duh, or else I wouldn't be writing this blog entry now; I'd have written it years ago!). Well, then came images from an infrared camera on Hubble. Looking for planets in the IR is good. Stars are bright, so bright that they totally drown out the feeble light from a planet. In visible light, that is. In the infrared, planets are much brighter, and stars dimmer. Instead of being a billion times brighter (as Alpha Cen was over any hypothetical planet I tried to simulate), in the IR stars might only be thousands of times brighter. That's still a lot, but easier to deal with. My friend Glenn Schneider had some intriguing data from the IR camera, showing a dim star (for the record, it was called TWA 6, because it's part of a loose group of young stars called the TW Hydrae Association), with another, dimmer star next to it. The colors of the object were consistent with it being a planet. Had he found a planet orbiting another star? He couldn't be sure, because it might be a background star masquerading as a planet. He needed proof. The only way to know was to either wait a year to see if the two objects moved across the sky together (more on that in a moment, because it's crucial to our tale), or to take a spectrum, break the light up into its colors like a rainbow. By doing that, you can tell the difference between a planet and a star. So Glenn used the camera I worked on to take spectra, and asked me to help analyze the data. I spent months slaving over that data. Months! But the goal was sweet: to have proof of the first image of an alien world orbiting a far off star... Other people (like my friend Eliot Malumuth) worked hard on the data too, but in the end we just couldn't do it. The star's light was swamping the fainter light from the other object. Dejected, we gave up. Turns out, later, follow-up observations showed it was a background star. Oh well. How did we know it wasn't a planet? Let's back up a sec. The Milky Way Galaxy is a collection of hundreds of billions of stars (and clouds of dust and gas and other junk) in the shape of a flattened disk. The stars orbit the center, and that includes the Sun. Even at 200 km/sec, it takes about 240 million years to circle the Galaxy once. Yikes. 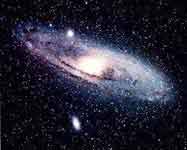 But other stars orbit at different speeds. So over years, we see the stars in the sky move with respect to each other. We call this their "proper motion" (I wrote a web page about this, with a Hubble picture showing this motion for a nearby star). So if you take an image of a star, wait some time, and take another one, you can detect this motion. See where this is going (har har)? If we see a blip of light near a star, it might be a background star. So we wait a while, and then take another picture. If the nearby star moves a lot with respect to the other blip of light, chances are that blip is a star much farther away. If it were planet, it would share its stars motion across the sky. With Glenn's star, it turned out that the later observations showed the two objects not to be moving together. They were unassociated, and we didn't have a planet. Fast forward five years or so, to 2004... Last year, a team led by astronomer Gael Chauvin used the prosaically-named Very Large Telescope in Chile, and they spotted something interesting. Near a faint red star called 2M1207 (ironically, in the TW Hydrae association!) was a fainter, even redder blip of light. Hmmm...they got a spectrum, and it sure looked like a young planet, still hot from its formation, but they couldn't be positively, absolutely sure. The only way to confirm whether it was a planet or not was to wait, and get more images later. Then they could see if the two blips moved together. Fast forward again, to April 2005... Hey, that's now! Success!

The image above (clicking it takes you to a 220kb higher-res image) shows the proof. The blue line is the motion of the planet relative to the star if it's not a planet, and the flat red line is if it really is a planet, moving with the star. Note the points on the plot-- they are smack dab on the red line. The two blips moved together. That means the last bit of doubt is gone. They did it! I now pronounce you star and planet. In fact, the star needs a name change: it's now called 2M1207A. The planet is 2M1207b (stars are upper case, planets are lower case, so that's not a typo). My sincere and very exuberant congratulations to Gael Chauvin and his team who made this incredible image. Look at it! Sure, it's young, only about 8 million years old (compared to 4.5 billion for the Earth), and it's still so hot that water in its atmosphere is still steam. And sure, it'll take a few million years to cool off, and even then it'll be a gas giant probably much like Jupiter. But it's a planet. And you can see it. As our technology gets better, we'll find lower and lower mass planets. Then there may well be a quantum leap: NASA plans on building space telescopes which can image planets the size of Earth, normal, mature planets, just like Earth, if they're out there. I think they are, and I think we'll see them. I wonder. My daughter is nine years old. By the time she's in college, taking an astronomy class -- will her professor show her an image of a world with blue oceans, green and brown continents, white clouds... orbiting Alpha Centauri?