First Eruption since 2009 Started at Fernandina in the Galapagos 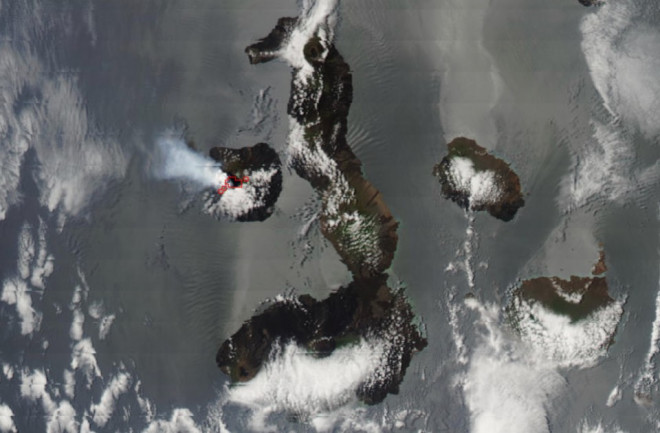 The white plume and thermal signature (red box) of the new Fernandina eruption as seen from Terra's MODIS imager on September 4, 2017. NASA. News out of Ecuador is that Fernandina in the Galapagos Islands has erupted for the first time since 2009. Starting just after noon (local time) of September 4, the volcano produced new lava flows and a steam-and-gas plume that reached upwards of 4 kilometers (13,000 feet). Video of the eruption (see below) taken that evening show the strongly glowing summit area of the volcano and images show the lava flows working their way down the flanks of the volcano.

The last eruption of Fernandina in 2009 was a fissure eruption

of the Galapagos Islands. The island itself is uninhabited, so the hazards are really to the animals living on the island. Rarely do eruptions from Fernandina become explosive, but geologists from the Instituto Geofísico

said that small explosions are not out of the question. The most recent eruptions at Fernandina lasted a few weeks. The last eruption in the Galapagos Islands was from Wolf

last almost 2 months as ranked as a VEI 4

. Note: Interestingly, an M4.6 earthquake occurred between Fernandina and Isabelle

on September 2, just to the south of Fernandina. The depth was ~10 kilometers, which wouldn't be unreasonable for magma moving from its mantle source under the Galapagos into the oceanic crust. Now, this isn't causation, but definitely an interesting correlation.