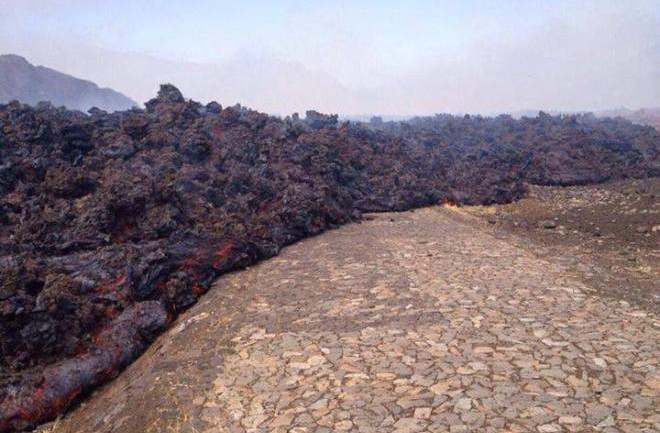 A lava flow from a November 23, 2014 eruption of Fogo in the Cape Verde Islands.

It has been almost 20 years since Fogo, a shield volcano on the island of the same name in the Cape Verde Islands, erupted. However, it appears that the volcano's quiet has ended as a new eruption began this morning (November 24). Officials in the Cape Verde Islands have announced evacuations of Cha das Caldeiras on the slopes of the volcano. The eruption has formed a small steam-and-ash plume near the flanks of Pico, a small cone inside the main caldera at Fogo. Earthquakes became noticeable to people living on the island starting Saturday night and by morning, an eruption had begun. According to volcanologists monitoring Fogo, the volcano had been showing signs of unrest "for awhile". The Facebook page for FogoNews has some images of the new activity on the volcano, including some impressive shots of lava flows from the eruption (see above) and lava fountains as well. The lava close is close to cutting off the only road that connects to the two sides of the small island as well. Most of the activity at Fogo for the past 500 years has occurred within the main caldera of the volcano and the eruption in 1995 was centered on the flanks of Pico. The eruptions are dominantly lava flows, although unlike shield volcanoes like Kilauea, Fogo erupts both low-silica basanite (similar to basalt but higher in alkaline elements like sodium and potassium) and high-silica phonolite (similar to rhyolite but higher alkalines). That eruption in 1995 created a lava flow field that spread over 6 square kilometers of the caldera floor. You can watch footage of the activity from the 1995 eruption - lots of strombolian explosions and lava fountains to go with the lava flows.