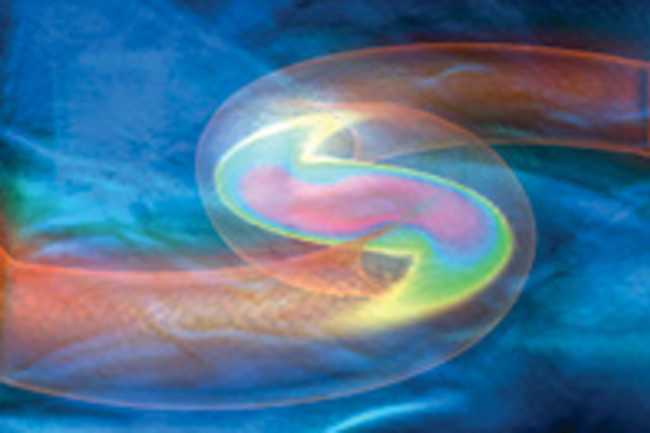 This simulation shows neutrons stars rapidly spiraling together as they collide. | David Bock/National Center for Supercomputing Applications (NCSA)/Board of Trustees of the University of Illinois

The most intense explosions in the universe, known as gamma-ray bursts, are also among the least predictable. “They are less likely to happen in the same place twice than a lightning strike,” says Pennsylvania State University astrophysicist David  Burrows, who heads the X-ray telescope instrument team for NASA’s orbiting Swift Observatory. So astronomers were elated when Swift recently spotted a rare 50-millisecond gamma-ray burst roughly 3 billion light-years away.

It was the first time scientists pinpointed a short gamma-ray burst (lasting less than a second), which probably occurs during a collision of dense neutron stars. Previously, astronomers had observed only long bursts typically lasting about 10 seconds, which are associated with supernovas. Both types are believed to mark the creation of black holes.

After detecting the initial flash, Swift focused on the burst’s faint X-ray afterglow, a dim electromagnetic signal emitted when high-energy particles from the blast heat the surrounding material. “It’s kind of like looking at the dying embers of the explosion,” says Burrows. In five minutes, the scope collected a mere 11 photons of light from the glow—tiny but enough for Swift’s sensitive instruments to track the detonation with accuracy.

Next? “One of the big things that we expected Swift to do is discover the origin of these short bursts,” says Burrows. “This is perhaps the most important scientific result that’s come out so far.”