First a Bunch of Matter Went "Dark." Now the Visible Stuff Is Invisible, Too.

Recent studies suggest that most conventional matter isn't locked up in galaxies, where we'd expect. 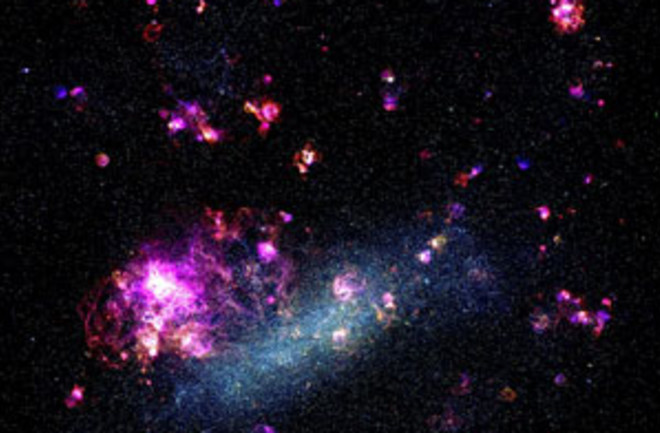 Astronomers have long inferred that most of the material in the universe is invisible, existing as mysterious dark matter. But a recent study suggests that most ordinary matter is hidden as well.

Widely accepted studies of the cosmic microwave background—the afterglow of the Big Bang—indicate that for every pound of normal matter in the universe, there are about six pounds of dark matter, unseen particles that are known only from their gravitational pull. Because galaxies spring from dense clumps of both types of matter, researchers assumed that on average, the makeup of galaxies should exhibit a similar 1 to 6 ratio. “The parts should sum up to the whole,” says University of Maryland astronomer Stacy McGaugh. But when he examined more than 100 galaxies, he found that all had substantially less ordinary matter than predicted. The Milky Way showed just a quarter of the expected amount. Smaller galaxies yielded even scantier quantities, with visible matter making up only about 0.05 percent of the least massive galaxies studied, Willman 1 and Segue 1. Most of the universe’s normal matter was nowhere to be found.

Some scientists had proposed that the missing stuff might be hidden in extended halos of gas surrounding galaxies, but University of Michigan astronomer Joel Bregman has dealt a blow to that idea. Studying light from distant stars that had filtered through the Milky Way’s halo, Bregman determined that “the matter really isn’t there,” he says. He suggests that perhaps much of the hot gas in the early universe was never captured by galaxies at all and instead remained scattered invisibly through intergalactic space.

A more radical explanation for the puzzling new findings involves rethinking the laws of gravity. A hypothesis known as modified Newtonian dynamics could eliminate both the missing matter problem and the dark matter in one fell swoop. But for now, abandoning Einstein’s extremely well-supported theory of gravity, general relativity, remains “a rather unpopular possibility,” Bregman says.