Finding the Secret Science in Works of Art

Shakespeare, Seurat, and Matisse knew little about physics, but their work is awash in its principles. 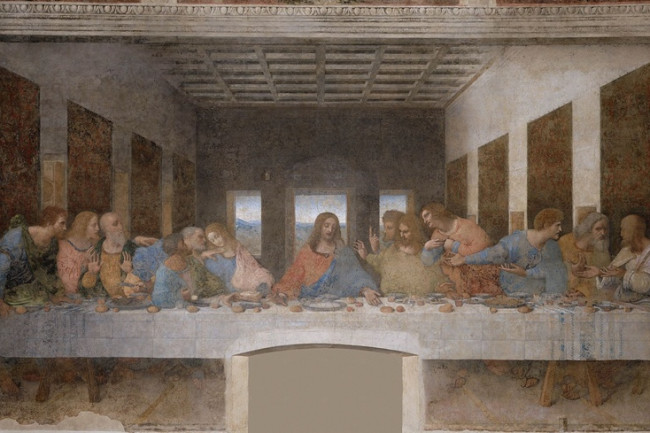 Leonardo da Vinci's "The Last Supper" is not only one of the world's most important works of art but also a classic example of the laws of physics at work.

When da Vinci completed the 15-by-28-foot masterpiece in 1498, his experimental oil-tempera mix did not adhere well to the damp wall of the monastery of Santa Maria delle Grazie in Milan, and the mural quickly began to disintegrate. Some 50 years later, da Vinci's biographer Giorgio Vasari remarked that there was "nothing visible except a muddle of blots." Extensive touch-up efforts during the last half millennium reversed much of the peeling and crumbling, but the original wonder and luster of the painting can never be fully restored.

The authors of On the Beauty of Physics feature "The Last Supper" as a case study of entropy—a measure of the tendency toward disorder in a thermodynamic system. Organized in encyclopedic form, the new book provides an enticing introduction to such concepts as acceleration, gravity, relativity, and space-time. Each scientific idea is succinctly explained and accompanied by a work of fine art, a poem or literary extract, and a newly created collage.

Writer Hilary Thayer Hamann traces the genesis of On the Beauty of Physics to a visit to a New York City art gallery, where she happened upon a collage of Rome's crumbling Colosseum by the artist John Morse. She subsequently hung the collage over her desk, and as she pondered the building's decay, she began to read up on entropy and to embark "on an adventure in learning," which introduced her to the ideas of, among others, physicists Lee Smolin and Janna Levin. It also inspired her to craft a book that would use fine art to stimulate interest in science as well as encourage readers excited by science to visit art museums. She enlisted physicist Emiliano Sefusatti to write single-page descriptions of key topics in physics and Morse to illustrate each idea with a collage.

The result is an amalgam of art, literature, and basic science, which weaves the uncertainty of Shakespeare's Hamlet with the uncertainty of quantum mechanics, detects the notion of antimatter in a delicate 1952 blue-and-white collage called "Venus" by Henri Matisse, explains torque with an 1899 lithograph of a twisting dancer by Toulouse-Lautrec, and integrates Beowulf with the Big Bang. The book also poses thought-provoking questions: How is seeking light a metaphor for finding truth? What forces have humans exerted over the force of nature? By stepping over traditional boundaries, On the Beauty of Physics reveals that science is not merely mechanical or utilitarian but radiant, colorful, and graceful too.

TORQUE Henri de Toulouse-Lautrec, in his 1899 lithograph of the snake-costumed dancer Jane Avril, depicted the principle of torque, the force that makes an object rotate about an axis. A large force close to the axis or a small force farther away from it can produce the same amount of torque; thus Avril had to apply a large force in order to twist her own body around its axis. Toulouse-Lautrec was a master at portraying movement in the artistes of the Moulin Rouge in Paris, easily capturing the flare of a skirt or the undulating brim of a hat.

CHAOS The Battle of San Romano, which Paolo Uccello completed in 1455, renders palpable a state in which chance reigns supreme. Though a pitched battle may begin with a simple plan, its outcome cannot be foreseen. Likewise, in science chaos describes a physical system whose behavior is unpredictable and whose final state is extremely sensitive to initial conditions.

PARTICLE All matter and energy are made up of particles: electrons, protons, and neutrons. Light photons are also particles, albeit with zero mass. In A Sunday on La Grande Jatte—1884, Georges Seurat skillfully wove light and shadows into a meticulous pattern of tiny paint particles that, when looked at from afar (inset), appear as a peaceful panorama of the bourgeoisie at leisure.