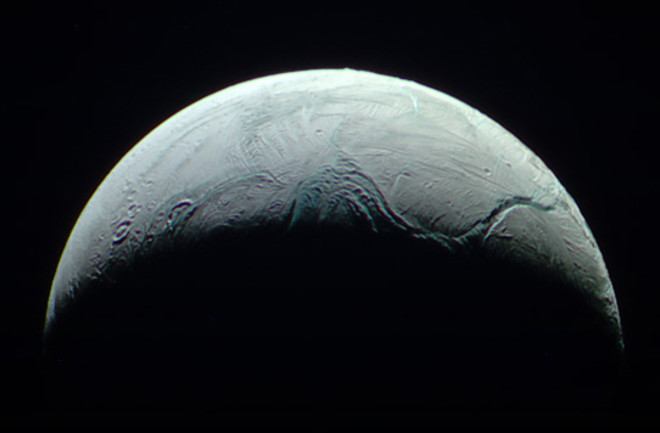 Saturn's moon Enceladus. (Credit: NASA/JPL-Caltech/Space Science Institute) When aliens arrive in the movies, they typically come from distant galaxies. Extraterrestrial life, however, could exist right here in our own solar system, nestled in briny oceans under the surface of icy worlds close to home. Multiple moons orbiting Jupiter and Saturn have proven to hold, or once held, liquid oceans. Of these, Saturn's moon Enceladus has emerged as the most promising candidate for life in recent years, thanks to the discovery of hydrothermal plumes gushing from beneath its frozen surface. The vents these plumes emanate from could foster an an ideal environment for the emergence of organic life, pumping in crucial compounds and energy. To find out if that might be the case, Laurie Barge travels to other worlds in her lab—here on Earth, of course.

Barge is an astrobiologist at NASA's Jet Propulsion Laboratory, and she and her team have spent the last few years growing tiny mineral plumes in beakers to model conditions on different moons and planets. Just a few inches tall, the crooked spires serve as miniature simulations of much larger features—some over a hundred feet tall—found deep in the ocean. Fed by hydrothermal vents on the ocean floor and sustained by the heat they emit, whole ecosystems flourish beyond the sun's reach in these aquatic high-rises. It's thought that life may have actually originated around these plumes on Earth, and the same process could be playing out in the depths of Enceladus.

An iron hydroxide plume in a beaker simulating early Earth conditions. (Credit: Erika Flores) Hydrothermal plumes provide a crucial source of chemical energy in vast, dark oceans. Before the evolution of photosynthesis, the sun's energy was beyond reach, and life needed alternative forms of sustenance. Near the vents, this comes in the form of ions leaching from beneath the ground and reacting in the hot environment with seawater. Each underwater plume represents a chain of reactions that yield nutrient chemicals, some of which can sustain simple lifeforms. Hence, the mini mineral mountains in Barge's lab. You can think of each one as a kind of alternate reality, testing out what would have happened had the oceans been more acidic, less oxygenated, hotter, colder, or any of a number of variables. Barge starts with a liquid similar in composition to the seas on Earth billions of years ago—lacking oxygen, rich in iron and carbonate—and experiments with different mixtures. She's looking for reactions that may have led to early organisms, the crucial moment when chemical reactions became something more. By testing a range of situations, she hopes to narrow down the set of conditions that could have led to life. "The best we can do is look back at what early Earth would have been like and then try to understand what life today tells us about the first life (the common ancestor) and then use those top-down, bottom-up approaches to figure out what kind of processes could have led to the origin," Barge says.

Scientists are already interested in Enceladus, but there's a catch: We don't fully know what the oceans on Enceladus look like, and we also don't have complete data on what's going on beneath the surface. The Cassini mission provided some clues when it dove through some of the plumes hanging high in the atmosphere of Enceladus and detected water vapor, carbon dioxide and organic compounds. Subsequent observations confirmed that a large ocean exists beneath the ice. This is where Barge's planet-in-a-beaker experiments could be helpful, as they allow researchers to work through many different scenarios to find those that best fit observations. The findings will inform future missions, and the experiments can be updated accordingly once more data comes in. Enceladus wouldn't necessarily need to be geothermally active for these vents to exist. Some hydrothermal plumes on Earth form as a result of chemical interactions between sediments and seawater. They can reach temperatures above 100 degrees Fahrenheit, and give rise to chemical reactions that could also have sparked life. Whether such vents are found on Enceladus — and what kind actually do exist there — will have to await future missions. Finding out what the seafloor on Enceladus looks like would be a big help, Barge says, as it would hint at what kinds of reactions are taking place. Translating what she finds in the lab to the real world could take even longer still, though. "Just because you can do something in a lab doesn't means it's going to be easy to detect with a planetary mission," she says.