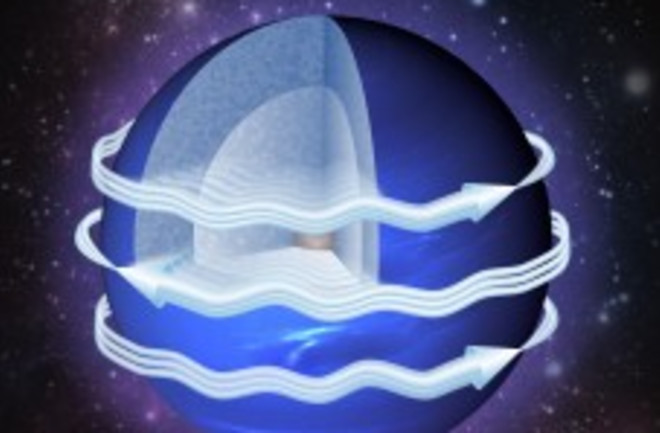 A schematic of the jet streams on the planet Neptune. The atmospheric circulation is characterized by westward flow near the equator and an eastward flow at higher latitudes. Courtesy of Yohai Kaspi, Weizmann Institute of Science; NASA In news that’s sure to delight young boys everywhere, scientists now have a better grasp on the impressive winds of Uranus. Neptune too. In a Nature study published today astronomers find that the most obvious weather patterns on the two ice giants are relatively shallow, only about 1,100 kilometers (683 miles) deep at most. The finding helps researchers understand the internal dynamics on Uranus, Neptune and similar exoplanets. The two farthest planets from our sun might seem familiar to us, but much remains unknown about how they work. For instance, scientists had long known that the atmospheres of both worlds seemed to be dominated by fierce east-west jet streams---near the equator velocities reach 750 miles per hour, and at the poles approximately 560 mph. But scientists didn’t know how the winds worked. Two theories soon developed: Either the winds were shallow phenomena, restricted to the upper atmosphere (remaining relatively shallow beneath the planet’s surface), or they were the result of some deeper planetary dynamics that could extend closer to the planets' cores. In order to figure out which was the case, the study’s authors studied the gravity fields of Uranus and Neptune. (The icy, gaseous planets have such a “squishy” makeup that the fast atmospheric winds actually alter their density in measurable ways.) Using data going back all the way to the Voyager 2 flybys of the 1980s, the team determined that the first explanation fit the data. Specifically, they calculated that the winds would be so shallow that they were limited to only the outermost 0.15 percent of Uranus’ total mass, and 0.2 percent of Neptune’s (about 1,100 km in both cases). The finding suggests that the shallow jet streams are the result of similarly shallow activity within the planet, but the authors are careful not to rule out the possible influence of internal heat driving the winds. The finding allows astronomers to fine tune their models not only of these two worlds, but also similar ice-giant exoplanets which are being increasingly found around other stars. The technique of using a planet’s gravity field to determine atmospheric dynamics might also soon provide a similar analysis of Jupiter and Saturn’s weather patterns.