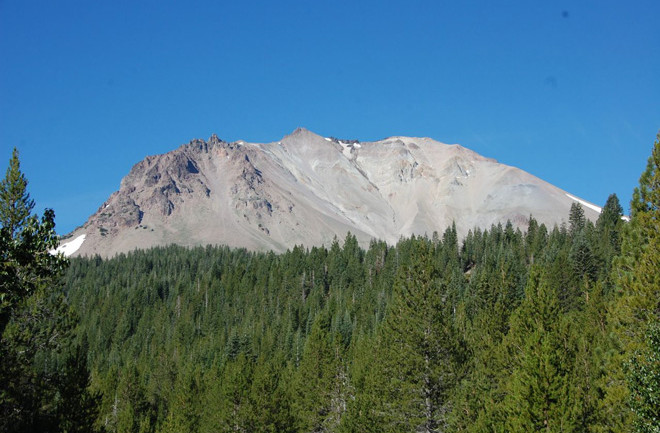 Lassen Peak in the southern Cascades of California. The dacite from the 1915 eruption can be seen as a small tongue of black lava just below (to the right) of the main summit. Image: Erik Klemetti, July 2013. So, what have I been up to the week? It has been all about the National Science Foundation project I have going about the Lassen Volcanic Center. Last year, I had a collaborative proposal with other faculty from UC Davis, Fresno State and Sacramento State get funded by NSF and I've been collecting new samples and data this summer with one of my summer research students. My part of this proposal looks at the longterm context of the magmatic system at the Lassen Volcanic Center (LVC) by examining the zircon record from over a dozen different lavas and tephras erupted since ~620,000 years ago and as recently as 1915. So far, my students and I have tackled three of these eruptions -- the 1915 dacite of Lassen Peak (see above), the rhyodacite of Chaos Crags (from 1,100 years ago) and the 25,000-year-old dacite of Lassen Peak. Next week, we'll tackle the zircon from the rhyodacite of Eagle Peak (from ~64,000 years ago) along with the surface of some zircon from the 1915 dacite and Chaos Crags rhyodacite. Hopefully, I'll be presenting on this work at the American Geophysical Union meeting this December. Now, this past week we collected a pile of new samples to add to the collection. These samples are representative andesite to rhyolite lavas and tephras from the lifetime of the modern Lassen Volcanic Center -- chosen because these types of lava are likely to contain zircon that can be dated by methods like uranium-thorium and uranium-lead isotopic analyses. We hit quite a few places across the park, so I thought I'd show you some pictures of the lava/tephra we sampled. Rhyodacite of Sunflower Flats (~41,000 years old)

The rhyodacite dome of Sunflower Flats, north of Chaos Crags. Image: Erik Klemetti, July 2013. These domes are located right off the Park Road in Lassen Volcanic National Park, just to the north of Chaos Crags. The domes themselves show up as low pancake-shaped hills that are mostly forested, but there are also some preserved pyroclastic flow deposits that can be find just below the modern surface in the forest surrounding the domes. Rhyolite of Raker Peak (middle Pleistocene -- around 600,000 years old)

The cliffs of the rhyolite of Raker Peak, possibly associated with the Rockland Tephra. Zircon analyses may answer whether these eruptions are directly related to the same magma chamber. Image: Erik Klemetti, July 2013. Raker Peak is along the northeastern edge of the Park Road and maybe be rhyolite lava flows associated with the caldera that erupted the Rockland Tephra (a ~80 cubic kilometer that erupted around 609,000 years ago). The cliffs are impressive, with some cooling fractures that likely formed in the interior of the domes associated with the rhyolite of Raker Peak. Andesite of Hat Mountain (~40-50,000 years old)

The low outcrops of the Hat Mountain andesite. These samples are in parts of the Lassen Volcanic National Park that was burned by the Reading Fire during 2012. Image: Erik Klemetti, July 2013. This unit is probably the one that is least likely to have zircon, but it was important to sample because it was one of the largest eruptions at the LVC over the last 100,000 years. The sample we took was from the most silicic part of the flows, but we'll have to wait and see if the thin sections and mineral separations reveal zircon. Rockland Tephra (~609,000 years ago)

Rockland Tephra in a quarry near Manton, California. The Rockland is the white later near the base of the hill, thickened here by reworking after the eruption. Image: Erik Klemetti, July 2013. I mentioned the Rockland Tephra with the rhyolite of Raker Peak, but here we sampled the Rockland in a quarry hear Manton. This deposit -- the light band in this outcrop -- was likely thickened in this location by reworking the ash and lapilli from the eruption afterwards. However, the Rockland is clearly one of the largest explosive eruptions in the Cascades over the past 1 million years. Now, this is just a taste of the what we sampled -- and we have a lot of work to do with these samples, but this is what drives me as a geologist. This project will give us a great idea of how a volcanic center like Lassen evolves over the last 650,000 years (at least) -- and this would be one of the few Cascade volcanoes that has been disassembled in this way. There are lots of mysteries to unravel and more likely than not, more questions to come.