Field Notes: The Revolution of the Moons

When Galileo discovered the moons of Jupiter, he gave evidence for what Copernicus had merely intuited: Not all heavenly bodies circle Earth. 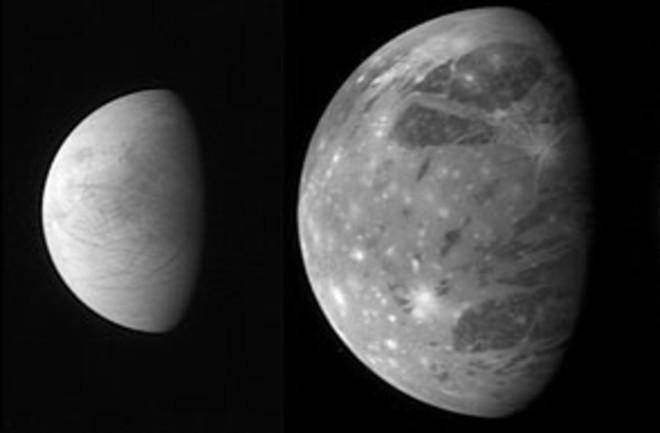 Padua, Italy—During the January nights in 1610 when Galileo discovered Jupiter’s four largest moons from a balcony in this city, he remarked how the planet with its circling satellites resembled the sun and its retinue of planets. In January 2010, as celebrants from 16 countries gathered here to consider “Galileo’s Medicean Moons: Their Impact on 400 Years of Discovery,” the controversial bodies were still sparking comparisons throughout the solar system and beyond to exoplanets scattered across the Milky Way.

One of the great Italian astronomer’s own telescopes stood on public display in the palazzo where the symposium took place. The homemade appearance of the instrument—a wooden tube covered with brown paper and fitted with two small lenses—cut an impossible contrast to the remote sensing devices and future spacecraft designs that dominated the scientific presentations. Nevertheless, at every coffee break during the three-day meeting, one or more participants would gravitate to the telescope. Hyped on the genuine espresso and cappuccino being served, they stared as though they might never tire of looking at it.

Seen through Galileo’s telescope, the moons of Jupiter appeared as mere points of light, indistinguishable from one another. Even so, they fomented an instant scientific revolution. Their existence gave evidence for what Copernicus had merely intuited: Not all heavenly bodies circle Earth.

The first morning’s session focused on the moons’ entry into 17th-century society. Although today we know these bodies—Io, Europa, Ganymede, and Callisto—as the Galilean satellites of Jupiter, Galileo himself wanted to call them the Cosmian Stars, in honor of his potential patron, Cosimo de’ Medici, the grand duke of Tuscany. Cosimo accepted the moons as a gift but preferred the name Medicean to describe them. Galileo of course complied, in a calculated move that won him a lifetime appointment as court mathematician and philosopher, plus generous Medici support for his research. I saw several scientists in the audience nod on that note, sympathetic with the time-honored need for government funding of big science.

After the initial discovery, Galileo faced the tougher job of studying and timing the moons’ regular orbits. He noted how they were periodically occulted by Jupiter or eclipsed in the planet’s shadow, and he applied these data to the practical problem of determining longitude at sea. (A navigator could compare the precise times at which these phenomena were observed from shipboard with the times they were predicted to occur if seen from a place of known longitude, such as Padua, then use the time difference to calculate his position east or west.) Although sailors never adopted Galileo’s technique, the moons proved a boon to cartography, helping to redraw land maps all over Europe.

Galileo’s successors followed the moons to other new conclusions about nature. Danish astronomer Ole Roemer, for example, watching the moons from the Paris Observatory, noted how their eclipses preceded the predicted times when Jupiter and Earth came nearest each other. Similarly, the moons’ eclipses fell minutes behind predicted times when Jupiter and Earth lay farthest apart. Roemer attributed these discrepancies to the time needed for light to travel across space from Jupiter to earthly observers. With the moons as his touchstone, he clocked the speed of light for the very first time, in 1676. His answer fell 25 percent below the modern value but greatly improved on the previous estimates of “infinite” and “immeasurable.”

By afternoon, as scientists at the conference recapped findings from missions to Jupiter, Galileo’s moons changed from four attendants to four worlds in their own right. During the 1979 flybys of NASA’s Voyager probe, Io shot plumes from an active volcano that were caught on camera. The Galileo spacecraft, which orbited Jupiter from 1995 until 2003, detected a magnetic field around Ganymede and helped raise the census of known Jovian satellites to 63. It also found a vast saltwater ocean under the icy shell of Europa, fanning fantasies of extraterrestrials coming to life in those seas. The different properties of the Medicean moons—from Io’s volcanism and Europa’s ocean to Ganymede’s magnetism—can all be traced to their relative nearness to Jupiter and the strength of the tidal stresses they endure as they orbit the planet.

NASA’s Juno, one of many planned projects described at the symposium, is being readied for launch next year. Juno will orbit perpendicular to the planet’s equator instead of following the more traveled path around it, and will get a bird’s-eye view of the giant auroras seething at the poles. These flamboyant light displays owe their colors and shapes to supercharged interactions among the sun, Jupiter, and its satellites. Io in particular, the closest of the four Galilean moons, contributes mightily to the store of charged particles that excite Jovian auroras, due to its several hundred volcanoes.

“Io is a paradise for volcanologists,” said Rosaly Lopes of the Jet Propulsion Laboratory, “but it’s hell for cartographers, because the minute you make a map, it’s obsolete.”

Lopes’s birthday fell during the symposium week, and she commented how she wished she had been born on January 7 (the day Galileo first saw the Medicean moons) instead of on the 8th. Later she learned that although Galileo noticed the moons on the 7th, he mistook them for background stars, not questioning their true identity until the following night, when he returned to find two had moved from one side of Jupiter to the other. Eager to see them again, he was frustrated on the 9th by overcast skies.

The weather in Padua proved even worse for the 400th anniversary of these discoveries, with clouds and rain almost every night.

On the 10th, in 1610, the moons appeared in yet another configuration, and on the 11th, Galileo “arrived at the conclusion, entirely beyond doubt, that in the heavens there are...stars wandering around Jupiter like Venus and Mercury around the sun.” With those words, he reported the findings in his explosive little best seller,

Scientists now think that all of Jupiter’s moons and rings formed from a disk of debris around the newborn planet, just as the planets of the solar system took shape in the disk of leftovers surrounding the infant sun. Similar disks are observed today around other sunlike stars and are presumed to be new planetary systems in the making. Most have “hot Jupiters”—gigantic planets, some of them several times the mass of our own Jupiter, lying as close to their parent stars as Mercury is to the sun, or in many cases far closer.

The absence of a hot Jupiter in our own solar system, according to symposium speaker Alessandro Morbidelli of the Observatoire de la Côte d’Azur, France, reveals some of our ancient history: At one stage Jupiter was indeed spiraling rapidly inward, but Saturn checked its progress. Saturn “caught” Jupiter in a resonant orbital pattern that kept both planets from continuing their sunward course. Morbidelli also noted how planetesimals (protoplanets, such as the preserved relics in the Kuiper belt beyond Neptune) can take a long time to come to rest. To emphasize the point, he invoked Galileo’s famous phrase, “Eppur si muove” (“But still it moves”).

Nick Schneider, an expert on Io’s atmosphere at the University of Colorado at Boulder, stayed an extra day in Padua after the symposium ended. “I will torment you by saying that on Sunday the skies cleared,” he wrote to me, “and I had the privilege of letting some Italian kids rediscover the Medicean stars with a telescope I had brought, while their mother read aloud—in a dramatic voice—Galileo’s words from Sidereus Nuncius. You would have loved it!”