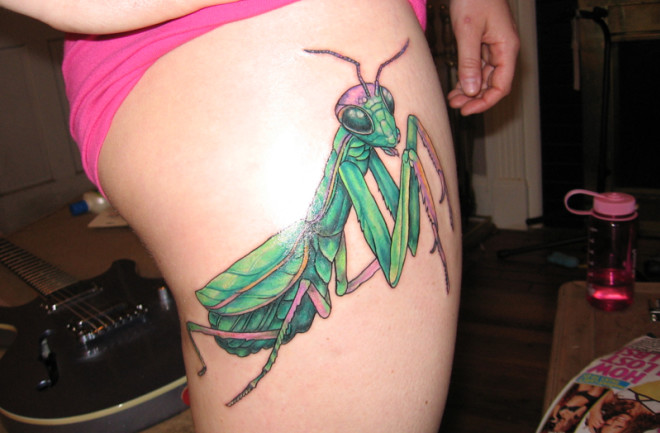 I am a soil scientist and entomologist. My favorite insects/arthropods are praying mantises, psuedoscorpions and spiders. I am also a big time feminist. I find praying mantises to be so fascinating, and while they are extremely adept killing machines, they are also one of the oldest insects around! This tattoo is a metaphor for my independance and tribute to my mantis friends.From Wikipedia: Sexual cannibalism is common among mantids in captivity, and under some circumstances may also be observed in the field. The female may start feeding by biting off the male's head (as with any prey), and if mating had begun, the male's movements may become even more vigorous in its delivery of sperm. Early researchers thought that because copulatory movement is controlled by ganglion in the abdomen, not the head, removal of the male's head was a reproductive strategy by females to enhance fertilisation while obtaining sustenance. Later, this bizarre behaviour appeared to be an artifact of intrusive laboratory observation. Whether the behaviour in the field is natural, or also the result of distractions caused by the human observer, remains controversial. Mantises are highly visual creatures, and notice any disturbance occurring in the laboratory or field such as bright lights or moving scientists. Research by Liske and Davis (1987) and others found (e.g. using video recorders in vacant rooms) that Chinese mantises that had been fed ad libitum (so were not starving) actually displayed elaborate courtship behavior when left undisturbed. The male engages the female in courtship dance, to change her interest from feeding to mating. Courtship display has also been observed in other species, but it does not hold for all mantises.So in fact, the common assumption that all females cannabilize their mates either during/after copulation is debated because most observations of this were in a lab, where the mantis was likely highly aware of her captors. I have a magnet on my fridge with a woman in a wedding dress that says..."Marriage? No...I don't mate well in captivity!"

Carl: For more on mantises and their hungry love, see my article in the New York Times. Click here to go to the full Science Tattoo Emporium.