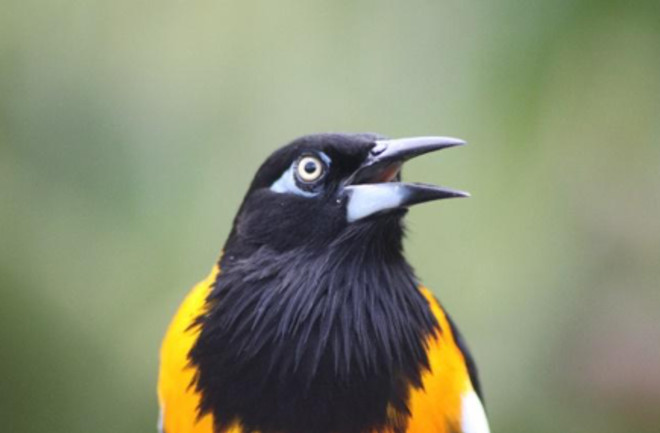 Female Troupial, Photo Credit: Dr. Karan Odom Songbirds may be nature’s pop stars, but the females are still waiting for a turn in the spotlight -- we don’t even know if females sing in about 70 percent of songbird species. This is because the study of birds has a gender gap: most previous research has focused on male song. Participants in the Female Bird Song Project are looking to right this imbalance. “I think this is a very important project. It involves citizen science in gathering fundamental information about the behavioral diversity of birds,” says evolutionary ornithologist Richard Prum of Yale University. Researchers from the Cornell Lab of Ornithology and Leiden University call on birders to contribute videos, photos, sound clips and field notes of female bird songs so they can better understand the evolution and role of this expressive behavior. Their research already revealed that female birds have most likely been singing for tens of millions of years. To participate, citizen scientists use their smartphones or other recording devices to document female songs and upload them to project-sponsored online databases. Principal investigator Dr. Karan Odom, a behavioral ecologist at Leiden and Cornell, says every recording is important because, “Female birds are so under-represented in collections and we know so little about their songs.” Odom is currently studying the songs of Venezuelan Troupials in Puerto Rico, and has discovered that females sing more often during the day than the males. By studying when, where and why female birds sing, Odom and her colleagues hope to shine a new light into songbirds’ singing culture, and explore how singing varies between the sexes in different species. “This is an opportunity to contribute to a whole new area of science,” says ornithologist and principal investigator Dr. Mike Webster.

Female and male Northern Cardinal, Image Credit: Creative Commons, courtesy of Craig O’Neal on flickr Freelance field ornithologist and citizen scientist Bobby Wilcox is a frequent contributor and he recorded the female and male Northern Cardinal in Iowa. In this recording, the female is the prominent singer and the male joins in after about 40 seconds. “It seemed like a fun challenge both as a recordist and birdwatcher in general to start paying closer attention to who was singing and considering what the meaning of that song might be,” says Wilcox. He points out the Northern Cardinal is a good choice for the project because it is easy to tell the difference between the males and females. That’s not true for all bird species. When the sexes look the same, finding a female singer is harder and it’s possible female songs have been wrongly attributed to male birds. Why Do Birds Sing? While humans produce sound vibrations with the larynx atop our windpipe, birds use the syrinx, a structure located lower down at the juncture of their lungs’ two air tubes. Birds can produce a lot more sounds than we can because they make distinct noises using air from each tube. Each songbird species has its own repertoire of songs they use to interact with potential mates and in other social scenarios. Nightingales sing up to 300 different love songs and Brown Thrashers, who are mimics, produce over 1,000 varieties. Like babies learning words, young birds learn songs from adults with the help of social cues. Groups of birds in different areas may even developed unique dialects. Songs are distinct from calls, which are short, simple vocalizations used for warning, begging or contact. As well as having a gender gap, the study of birds has a geography gap as well; most past bird song research has focused on male song in temperate regions such as Europe and North America. Many of these temperate-breeding songbirds migrate and use songs to establish themselves and seek mates when they arrive at their breeding grounds. But, most members of the about 5,000 songbird species live in tropical areas such as Southeast Asia and the Amazon River Basin. These birds often maintain one territory and mate for one or more years. They use songs for many varied reasons, such as to communicate, claim food and debate territorial boundaries. Female song is more prevalent in these regions. Male and females are also more likely to form vocal duets, like the Barred Antshrike of Brazil, to announce themselves and warn others away from their territory. In some cases, the females take the lead in territory-defense singing, like the Stripe-headed Sparrow of Central America. What Does the Research Show so Far? The Female Bird Song Project team released a comprehensive survey of female bird song in 2014. They researched documentation of female song in different species and arrived at a 92 percent likelihood that the oldest shared ancestor of the song birds we hear today had female singers. This finding spurred them to investigate why female and male birds have been singing all this time and which ecological factors played key roles in the evolution of their songs. Leiden biologist and principal investigator Dr. Katharina Riebel says territoriality, migration and mating systems might be the most important factors to focus on. “But, “ she says, “we urgently need more field studies looking at the context in which females produce song,” Around 660 songbird species are known to have female singers but only about 200 of them have been recorded. The Female Bird Song Project is now working to vastly improve their collection and understanding of these songs -- that’s where the citizen scientists come in.

Female Yellowhammer, Photo Credit: Creative Commons, courtesy of Kentish Plumber on flickr Want to Help? “We strongly believe that researchers can’t do comprehensive studies on the songs of female birds worldwide without the help of citizen scientists,” Odom and a collaborator wrote in Birding Magazine. While the tropics are thought to be the most fertile areas for studying female song, the researchers are collecting female and male recordings from citizen and professional scientists around the world. Everyone is encouraged to participate and Riebel assures all citizen scientists that any misidentified recordings will be discovered. The Female Bird Song Project site offers a participation guide, tips on identifying female birds and a contributors' map. Webster is particularly intrigued by species whose females sound quite different from males. For example, he explains that in Canyon Wrens “male song is a strongly descending series of plaintive notes, but females sound exactly the opposite — their songs walk up the scale.” This makes him think the sexes are probably singing for different reasons. Check out The Female Bird Song Project’s list of 1,125 target species for your chance to discover the next female vocalist waiting in the wings.

Writer and journalist Julia Travers is a member of Friends of Joe’s Big Idea, a community of scientists developing their science communications skills with the guidance of NPR science correspondent Joe Palca and producer Maddie Sofia. Follow Julia on Twitter @traversjul. Want more citizen science? Check out SciStarter's Project Finder! With 1100+ citizen science projects spanning every field of research, task and age group, there's something for everyone!