Fatalities at Rokatenda After Pyroclastic Flow 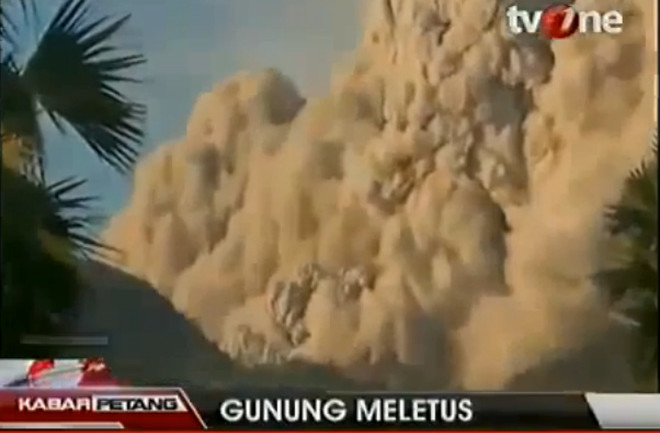 Video capture of a news report on the eruption at Rokatenda (Paluweh) that killed at least 5 people. Image: YouTube. Some grim news out of Indonesia today. An eruption from Rokatenda (also known as Paluweh) killed at least 5 people during what appears to be a pyroclastic flow that swept (video) from the active crater to the beaches below. Rokatenda is an island volcano on Palu island where the coasts are only a few kilometers from the summit of the volcano, so any unexpected explosion or dome collapse can produce a pyroclastic flow that will reach the shores of the island within minutes (if not less). The pictures of the eruption clearly show the pyroclastic flow sweeping out to sea, so any people on the shores of the island in the path of the pyroclastic flow wouldn't stand a chance to survive the mix of superheated volcanic gases and debris (ash and rocks) moving at hundreds of kilometers per hour. Sadly, this eruption in itself was fairly small, producing a plume that was only ~2 km (6,500 feet). Rokatenda has been producing these small eruptions frequently over the past year, so local villages had starting ignoring the mandatory evacuation order according to Suruno, the head of the PVBMG. Now, a lot of news sources are running that the victims were killed by a lava flow -- see Fox News and Gawker. The images of the eruption show that this is clearly not the case -- the billowing ash cloud is a pyroclastic flow. Even without the image, lava flows are very unlikely to catch people by surprise as they tend to move only a few kilometers per hour. In only very rare cases have people been killed by a fast moving lava flow, and that requires very hot basaltic lava that has low viscosity. The eruptive activity at Rokatenda is much more viscous, forming domes of andesite and dacite that are prone to collapse to form pyroclastic flows. Unfortunately, these dome collapses or explosions that form pyroclastic flows are hard to predict, so becoming complacent about the threat posed by an active volcano like Rokatenda is one way that fatalities occur. Evacuation orders are very disruptive to one's life, but it might be one of the few ways to prevent losing your life.