So the web is buzzing right now over news that scientists have detected some subatomic particles moving faster than the speed of light. Yeah, well, not so fast. Let's think about this for a sec. 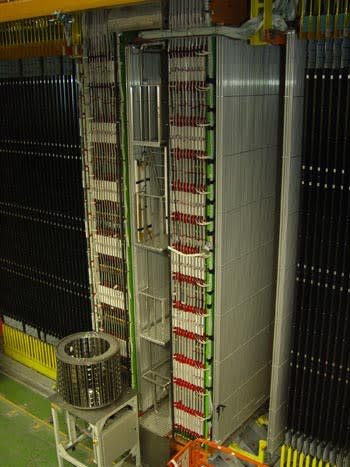 First, what happened is that they create these particles, called neutrinos, at CERN in Geneva. Neutrinos don't interact with normal matter well, so they can pass right through the Earth as if it isn't there. In a fraction of a second, some of them enter a detector called OPERA in Italy where they are recorded (pictured here). If you divide the distance between those two points by the time it takes for the neutrinos to travel, you get their speed. And when the scientists did that, they find the neutrinos get to Italy about 60 nanoseconds faster than a photon would. Photons travel at the speed of light -- they are light! -- so this means the neutrinos, if this is all true, traveled faster than light speed. Holy Kessel Run! But is it true? Now first off, if it were this would overturn so much physics that they may as well have discovered that gravity pushes, not pulls. So right away we need to treat this claim with lots and lots of skepticism. I'll note these are actual particle physicists making this claim, and not some crackpots who will shake their fists at the sky and say how Galileo was laughed at too. The thing to do is to look at where this claim might have gone awry. First, the timing is interesting. They claim a measuring accuracy of 10 nanoseconds, so 60 ns would be pretty significant. However, my first thought is that light travels about 30 centimeters in 1 ns, so they need to know the distance between the source and the detector to an accuracy of 3 meters. If they are off by 20 meters, then we're done; that would explain the difference entirely. I suppose this depends on how they measured the distance and the speed of the particles, too. However, they haven't published a paper on this just yet, so that'll have to wait.

[UPDATE: The paper is now up on the arxiv preprint server. I took a look, and must say at first glance their reasoning looks solid. They appear to have the baseline distance nailed and the timing as well. However, the devil's in the details, and this isn't my field, so I'll be very curious to see how the pros in this discipline react to the paper.]

Also, as pointed out in a Science Magazine article, knowing the exact moment the neutrinos are created isn't easy either. Mind you, 60 nanoseconds is 0.00000006 seconds, so they need a pretty good clock here. That page also says they used GPS to determine the distance, which could be off a bit. 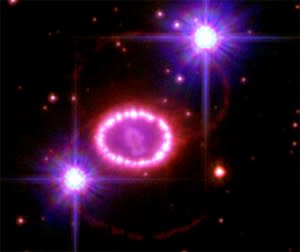 There's another point that actually is quite important here. If neutrinos travel faster than light, then we should've detected the neutrinos from Supernova 1987A before we saw the explosion itself. That exploding star was formed when the core of a massive star collapsed, detonating the outer layers. The collapsing core blasted out a furious wave of neutrinos strong enough to be seen here on Earth, over 160,000 light years away. The distance from the detector in Italy to the source in Geneva is about 730 km. The travel time at the speed of light is about 2.43 milliseconds, and the neutrinos appear to have outraced that speed by 60 nanoseconds. If true, that means they were traveling just a scosh faster than light, by about 1 part in 40,000. The neutrinos from SN1987A traveled so far that had they been moving that much faster than light, they would've arrived here almost four years before the light did. However, we saw the light from the supernova at roughly the same time as the neutrinos (actually the light did get here later, but it takes a little while for the explosion to eat its way out of the star's core to its surface, and that delay completely accounts for the lag seen). But I wouldn't use that argument too strongly; perhaps this experiment creates neutrinos in a different way, or the neutrinos from this new experiment have different energies than ones created in the cores of supernovae (a good bet). Still, it's enough to make me even more skeptical of this FTL claim. I'll note that the scientists will be presenting these results tomorrow at a conference at CERN. We'll learn more then. It's not clear to me if these results are being published, or have been peer-reviewed, or what. As usual, we'll need to have other scientists either confirm this result using other equipment, or show where things went wrong. That's how science works. And the scientists involved are asking for criticism here! That's just so; incredible results need to be tested incredibly well. So don't let your imagination run away with this just yet. This result will, in my opinion, probably turn out to be incorrect for some reasons dealing with measurement. Faster than light travel is still a dream, even though I wouldn't say it's impossible... just very, very, very, very unlikely. Maybe someday we'll boldly go. But for now, I'm not betting my dilithium on it. Image credit: OPERA; NASA/ESA/Hubble