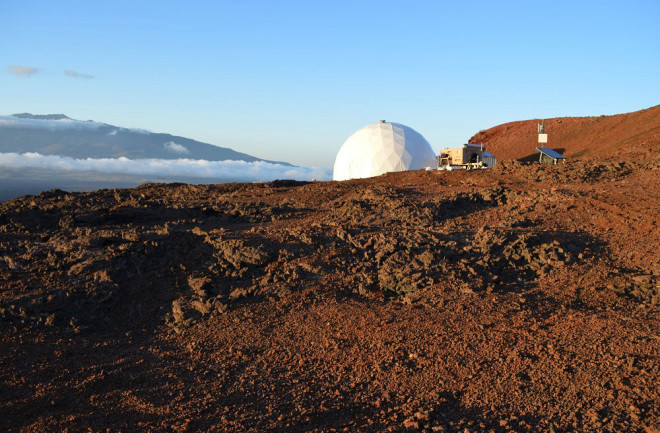 The HI-SEAS dome sitting atop its perch on the volcano Mauna Lua in Hawaii. (Courtesy HI-SEAS.org) There are very few people that would balk at the chance to spend four months in Hawaii. But let’s say you had to pass those four months shacked up in a 1,000-square-foot dome, shoulder-to-shoulder with five strangers who are only allotted eight minutes of shower time — a week. And, lest we forget, the only way you’ll enjoy the Hawaiian sunshine is by donning a frumpy, awkward simulation space suit each time you step outdoors. Still want in? Well, that’s the fate that awaits the six-member crew of NASA’s second HI-SEAS mission, which is meant to replicate, as closely as possible, what it would be like to live on Mars. The HI-SEAS simulator is built on jagged lava rocks 8,200 feet above sea level on the Mauna Loa volcano. It’s a desolate place that closely resembles the terrain of Mars. Three male and three female researchers officially began their four-month stay in the geodesic habitat on March 28. NASA plans to study how living in cramped quarters for an extended period of time changes crew members’ emotional and psychological state. The findings will offer a glimpse into the mental toll that a two-and-a-half-year manned mission to Mars — planned for around 2030 — might have on humans.

The first HI-SEAS mission tasked crew members with studying astronaut food for extended space missions. They experimented with both cooked foods and dehydrated entrees to find an ideal way to balance astronauts’ diets to maintain health and avoid “menu fatigue.” Four months may seem like a long time, but last year's crew kept busy with their regimented schedules that consisted of surveys, mealtime questionnaires, personal research, food studies and mandatory hour-long exercise sessions. Crew member Kate Greene documented life from the HI-SEAS simulator in a series of reports for Discover last year. Life in the simulated Mars colony was certainly a Spartan existence, where even the installation of a window was deserving of a celebration and a toast.

This year’s crew will also stay busy testing 3D-printed surgical tools, growing plants in Mars-like conditions, repurposing trash into tools and taking cognitive and psychological tests, the Atlantic reports. All the while, researchers will be noting changes in their mood and cognitive skills. “We’re going to stress them,” Kim Binsted, the project’s principal investigator, told the Hawaii Tribune-Herald. “That’s the nature of the study.” Binstead told Huffington Post that they are especially curious about the “three-quarters problem.” Researchers have noticed that when the mission is close to finishing, say the third month, signs of depression and other psychological issues start to show. The second HI-SEAS mission will certainly stretch crew members' comfort zones. But they can take comfort knowing that their stressful moments will help ensure humans' first trip to Mars is a success — a cause worth skipping some showers for.