Extreme Weather on the Sun

Cool, dark spots on the sun's surface have perplexed scientists since Galileo first wrote about them in 1610. The 20th-century discovery that sunspots are held together by potent magnetic fields has only engendered new puzzles: Such fields should repel each other and dissipate quickly, yet sunspots often remain visible for weeks at a time. Now researchers at Stanford University and NASA, employing a technique similar to ultrasound imaging in medicine, have uncovered how the planet-size dark zones hold together for so long.

Alexander Kosovichev of Stanford and his colleagues used an instrument aboard SOHO—the Solar and Heliospheric Observatory, launched in 1995—to measure the motion of sound waves across the sun's surface. By studying the propagation of these waves, the researchers were able to reconstruct a detailed image of the structure below a sunspot. What they found was a vortex, almost like a giant whirlpool. Some magnetized gas, or plasma, flows away from the spots but remains relatively cool because it is insulated from the surrounding material by its magnetic fields. The SOHO images show that the cooler material contracts and plummets toward the center of the spot at 3,000 miles an hour. This plunging plasma creates a powerful downdraft that squeezes and concentrates the magnetic field, which allows more plasma to cool, thus perpetuating the cycle. "Now that we have seen this process, we hope to understand the relationship between sunspots and solar flares and make some progress toward understanding solar activity as a whole," Kosovichev says. 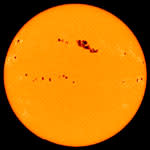 Dark spots on the sun may result from unseen whirlpools of plasma.Photograph courtesy of SOHO/NASA/ESA