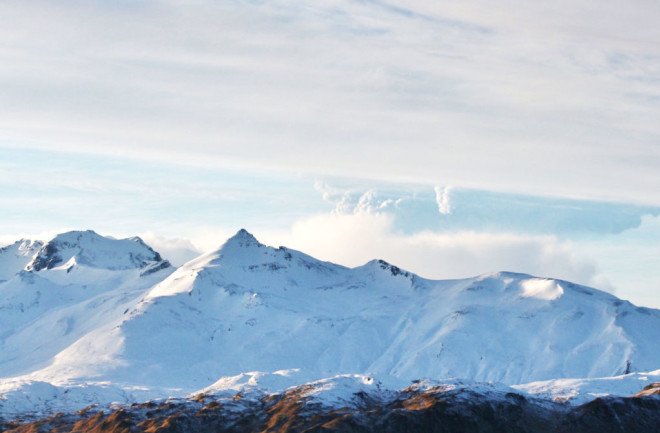 A plume rises from Bogoslof volcano, partially obscured by a mountain on Unalaska Island, on Wednesday, Dec. 21, 2016.Lynda Robinson/AVO A few updates on volcanic eruptions at the start of 2017: Alaska The biggest volcanic news of the last month has been the surprising and vigorous eruptions at Bogoslof in the Aleutians of Alaska. After producing a large explosive eruption on December 16, the volcano has followed up by adding more explosions every day or so, many of which reached 5 to 10 kilometers (15,000-35,000 feet) over the small island. Just yesterday (January 4), the volcano produced another explosion that reached 10 kilometers (33,000 feet). The highly explosive nature of these eruptions is likely rooted in the interaction between the new magma reaching the surface and the abundant seawater it meets when it erupts. That water can quickly flash to steam and help fragment the magma into ash, adding to the explosivity of the eruption. The Alaska Volcano Observatory has released a preliminary map (see below) that show the changes to the island, where these explosive eruptions have destroyed part of the previously existing island and added more land, mainly in the form of volcanic debris from these blasts. AVO currently has Bogoslof on a Red/Warning alert status because of the unpredictable nature of these towering explosive shots, many of which have been obscured by clouds. Instead, evidence of eruptions from Bogoslof has been picked up either by seismometers on distant volcanoes (like Alaska's Okmok) or via infrasound that detects low frequency sounds from explosion over very long distances (100s to 10,000s of kilometers).

Changes at Bogoslof in Alaska since new eruptions started on December 16, 2016.Chris Waythomas/USGS-AVOUpdate 1/4/2017 6:30 PM EST: Looks like Bogoslof had another explosive eruption today. Check out this Himawari-8 loop showing the great shot upwards of the plume and the lateral spreading, creating a plinian column that looks like an umbrella.

The #Bogoslof#volcano in the Aleutians had yet another explosive eruption this afternoon, via #Himawari visible; IR temp down to -58 C pic.twitter.com/pWgq5Q1Rqg

Hawai'i Meanwhile, over at Kilauea on the big island of Hawai'i, the current action is related to part of the volcano collapsing into the sea

. Part of a lava bench/delta (see top) built by lava flows reaching the Pacific Ocean collapsed. These benches are highly unstable, which is why the NPS and USGS try to convince tourists to stay away

from ocean entries lest you become part of the collapse into lava and boiling hot steam/water surrounded by acidic vapors (sounds pleasant). This collapse

also means that the lava reaching the ocean is vigorously pouring into the sea, leading to some impressive steam and ash plumes coming from that water-lava interaction (a little like a mini-Bogoslof). The NPS posted a video of the lava from the exposed lava tube shooting into the ocean

at the site of the bench collapse. The steam plume comes from lava at 1200°C hitting ocean water at ~15°C---quite a thermal shock that leads to the small explosions you can see in the video. http://www.youtube.com/watch?v=LPiJ2or0l0s Iceland In Iceland, Katla had a small earthquake swarm

that produced a M3.5 temblor. This is not unusual for the Icelandic volcano and likely a similar (but much smaller) version of the swarm from earlier in 2016

(which didn't lead to any eruption). Oh yes, and don't believe all those news articles claiming that the new study in Earth and Planetary Science Letters is "predicting" more eruptions soon from Iceland

. Instead, that research examined the record of activity and found that they are more common

than we might have previously thought (every 44 instead of 56 years, on average). It doesn't change a single thing about the state of volcanoes in Iceland---we just know more now about how common those eruptions could be on average.